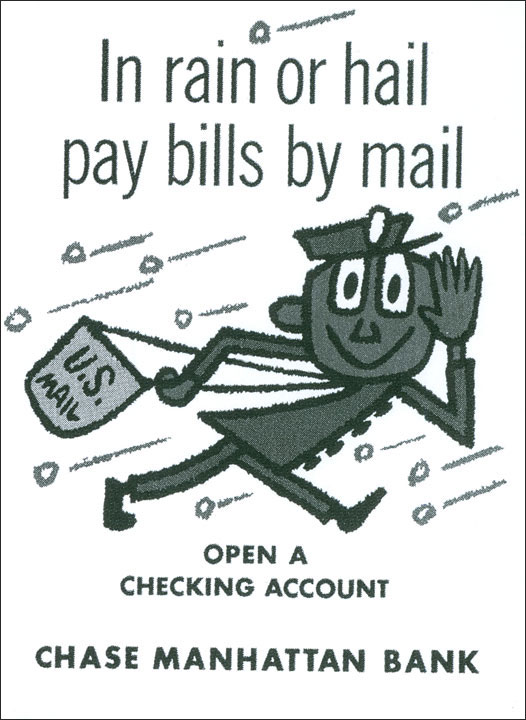 Mr. Zip, who would become the Post Office Department spokesman for the ZIP Code system, was designed in the 1950’s by Howard Wilcox for the advertising agency of Cunningham and Walsh. The cartoon’s original purpose was to advertise a bank-by-mail campaign for the Chase Manhattan Bank in New York City. After the campaign ended, the design was filed away. It was later acquired by the American Telephone and Telegraph Company (AT&T), who offered its use to the Post Office Department at no cost. The Department made a few minor changes to the Mr. Zip design, including elongating his body and at times giving him a letter to hold in his hand. The Post Office Department also eventually changed the cartoon’s name from the original “Mr. P.O. Zone” to something catchier – Mr. Zip.(1) Though Mr. Zip’s design was rather simplistic and “crude,” as noted by Postal employees, his whimsical characteristics would help him gain public recognition.(2)

Launch of the campaign

Mr. Zip was officially unveiled to postmasters at a convention in October, 1962, when the new Zone Improvement Plan (ZIP Code) was introduced. Each postmaster at the convention was photographed hugging Mr. Zip, and the photos were used on the postmasters’ nametags for the duration of the convention.(3) That same month, the Washington Post, Times Herald briefly mentioned Mr. Zip and the message he would bring to mailers across the United States: “Neither wind, rain, or any of those weather elements can slow down a piece of mail on which the sender has written the proper zone number.”(4) Another nod was given to the coming of Mr. Zip in the December 10, 1962 issue of Newsweek in a short article entitled “Aunt Minnie’s Tip…Look for ‘Mr. Zip’.”(5) Additionally, on June 30, 1963, the day before the official implementation of the ZIP Code system, the Daytona Beach Sunday News Journal reported that Mr. Zip would soon be “flashing across the country” in a massive campaign to promote ZIP Code, and that he would be appearing almost everywhere – from the sides of mail trucks to the TV screen.(6) Though all of these articles were printed before the official launch of the ZIP Code system and the Mr. Zip campaign, they foreshadowed the hype and public attention that would eventually surround Mr. Zip, and they contributed to greater widespread awareness of the ZIP Code campaign.

One question that may be asked in regards to the ZIP Code campaign is whether the use of Mr. Zip was indeed necessary to gain the cooperation of the American public. Because the concept of the promotional campaign, as well as the decision to use Mr. Zip were announced about nine months prior to the official implementation of ZIP Code, it is clear that Mr. Zip was not created in response to public protest against the use of ZIP Codes. Instead, the Post Office Department anticipated that the American public would probably be unwilling to use the codes. In fact, prior to the 1963 launch of ZIP Code, one AT&T executive warned Postmaster General Day that based on AT&T’s own difficult experience with introducing area codes to the beginning of phone numbers, the Post Office Department might have similar trouble getting ZIP Code to catch on among the public.(7) The POD heeded this warning, and believed that using Mr. Zip to add personality to the campaign would make it easier to obtain widespread acceptance of ZIP Code. In addition, a Department memo released two months after Mr. Zip’s convention debut noted that the positive response of the postal employees at the convention, as well as the positive response of public press confirmed that Mr. Zip would indeed aid the promotion of ZIP Code.(8) Based on this high level of initial public acceptance, the Post Office Department had no doubt that Mr. Zip would become an essential part of the promotional campaign.

With Mr. Zip at its side, the Post Office Department launched its nationwide campaign to promote the use of ZIP Code on July 1, 1963. In the months and weeks leading up to the implementation of ZIP Code, the Postal Bulletin, a weekly publication for postal employees, ran articles dedicated to instructing local postal workers on how to promote the new system. For instance, the June 13, 1963 issue featured an illustrated list of Mr. Zip promotional materials available for local post offices to purchase, along with instructions on how each item should be used. All of the materials, which included signs, posters, buttons and rubber stamps, featured images of Mr. Zip.(9) Two weeks later, the Postal Bulletin included a “Postmasters’ Check List on ZIP Code Programs,” which asked postmasters if they had put all Mr. Zip promotional materials to appropriate use, made staff arrangements to handle patron questions regarding ZIP Code, and made all efforts to publicize ZIP Code and Mr. Zip in local media outlets.(10) 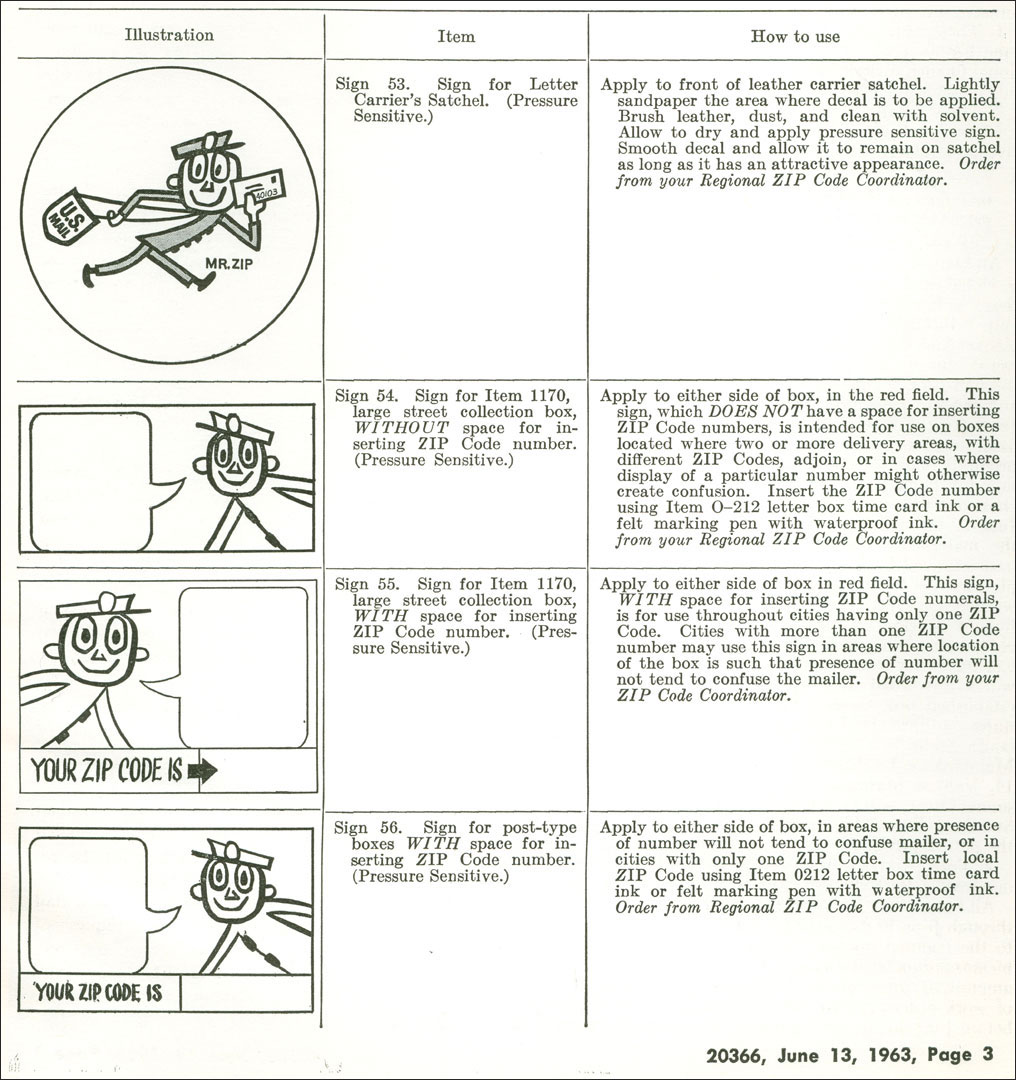 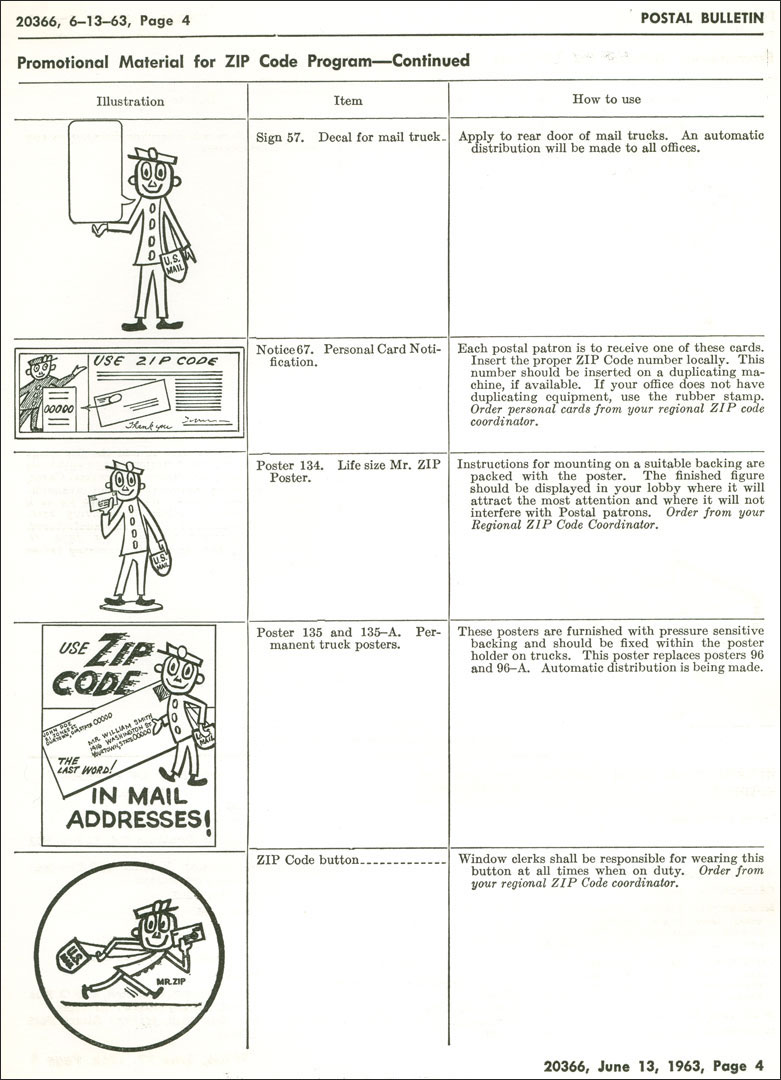 A few weeks before the implementation of ZIP Code, the Postal Bulletin published this list of ZIP Code promotional materials available for local post offices to purchase (Postal Bulletin, June 13, 1963).

The Post Office Department’s Public Information Office was responsible for handling the ZIP Code promotional campaign. This office had a fairly small staff, which was also busy with a number of other projects at the time of the launch of ZIP Code.(11) It put together a four step marketing strategy that would be the foundation of the Department’s ZIP Code campaign. The strategy was laid out as follows:

The POD stuck to its strategy throughout the campaign, first introducing Mr. Zip at the conference of postmasters and then introducing the concept of ZIP Code to the country via signs in post offices, local press releases and buttons worn by postal clerks. The Department would later turn its attention to encouraging local promotion of ZIP Code and Mr. Zip.

3) ZIP Code Promotional Material, Files of the historian of the USPS.

8) Memorandum by James F. Kelleher, Special Assistant to the Postmaster General sent to Bureau of Operations AT&T, December, 1962, ZIP Code Promotional Material, files of the historian of the USPS.

12) The Marketing of ZIP Code, Files of the historian of the USPS.

‹ A Zoning System in Development up Mr. Zip Around Town and in Local Post Offices ›
Back to Top