The White Motor Company was founded in Cleveland, Ohio in 1900. Originally a sewing machine factory, the owner Thomas White allowed his son Rollin to expand into cars and trucks. By the 1930’s the White company had become a leader in bus manufacturing. They received their first government contract when the National Parks Service wanted buses to carry tourists along their longer trails in Yellowstone and Glacier National Parks. In 1940 White Company’s proposal for a new Highway Post Office Bus was one of the three finalists selected for the new service.

The White Company went on to create a majority of the buses for the Highway Post Office until the mid-1950’s. They produced Highway Post Office vehicle #1 in 1941 out of duralumin. It was 32 feet long and weighed almost 16,000 lbs. It could carry 7,500 lbs. of cargo and had a 12 cylinder, 681 cubic inch displacement engine and ran on 210 horsepower. Its fuel tank could hold 105 gallons and while it got only got seven miles per gallon, it was not bad gas mileage for a bus in 1941. There were 120 pigeon-hole letter separations and 45 paper separations in the vehicle, which could also hold approximately 150 sacks of mail. For the first year of operation, the bus cost roughly $4.12 per round trip to operate. The yearly estimated operating cost including depreciation, maintenance, and salaries was approximate $44.403. The salary for the drivers was $2000 a year; the clerks were paid $2450 a year, and the clerk-in-charge received $2600 a year.(1) 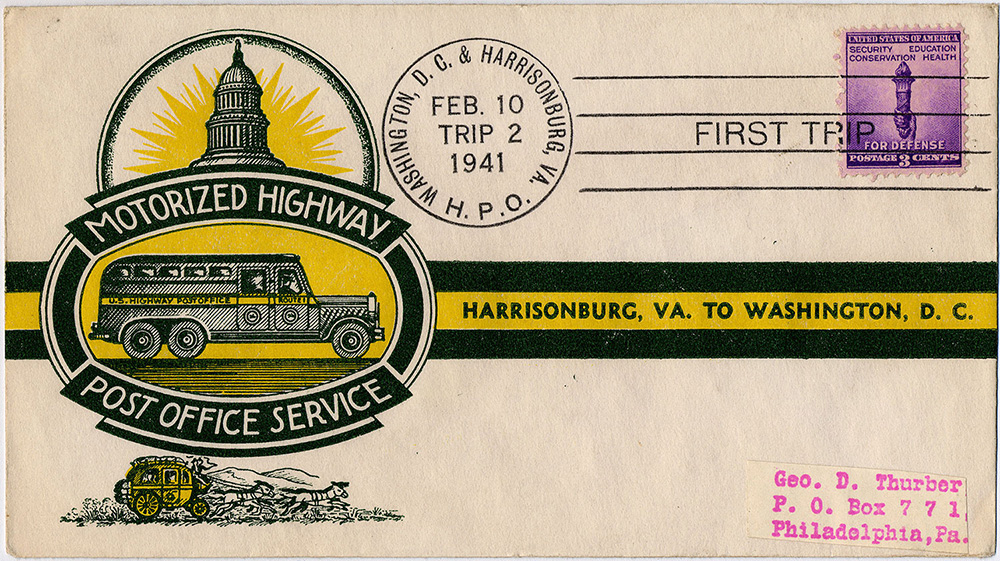 The first day cover for the Highway Post Office.

The #1 bus started it run on February 10, 1941 on the Washington/Harrisonburg route. It ran this route for the next four years completing a total of 236,877 miles before it was transferred. Fifteen months after the first run, the bus had roughly run 110,000 miles and had much general wear and tear. On May 12, 1942, a letter came from the General Superintendent of the Railway Mail Service sent a letter to PMG Hardy and stated the need for a massive overhaul of the #1 bus:

“We are informed by the Motor Vehicle Service, Washington DC that the Washington & Harrisonburg HPO is in immediate need of the following repairs: 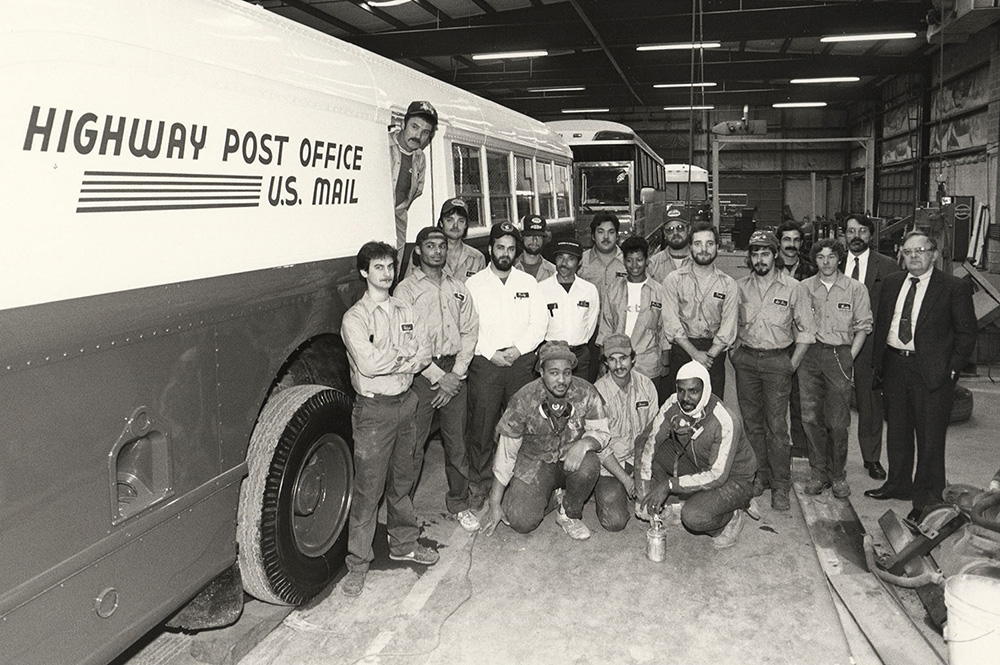 The American Postal Workers Union provided financing for contractors to fix up the bus.

The bus needed more work than the Post Office Motor Service Division could do, so an official asked the White Motor Company to send a mechanic. White agreed and sent a mechanic. The engine alone took 150 hours of work and cost $500. The total labor was 284 hours, and final cost to the Post Office was $1136.65. The bus continued to have problems thanks to poor upkeep and a few months later had another $200 worth of work done on its cylinder, heat and valves.(3)

A year later, in September 1943, the bus was heading back to Washington, D.C. when it collided with a fertilizer truck. The truck’s brakes had locked up while heading down a small grade hill. The road was slick and the truck began to lose control. Even though the bus pulled to a full stop, it was still hit by the truck. The two vehicles were only going a few miles per hour due to conditions. The Stearns trucking company paid damages and the damaged HPO went into storage while the route got a new bus.(4) 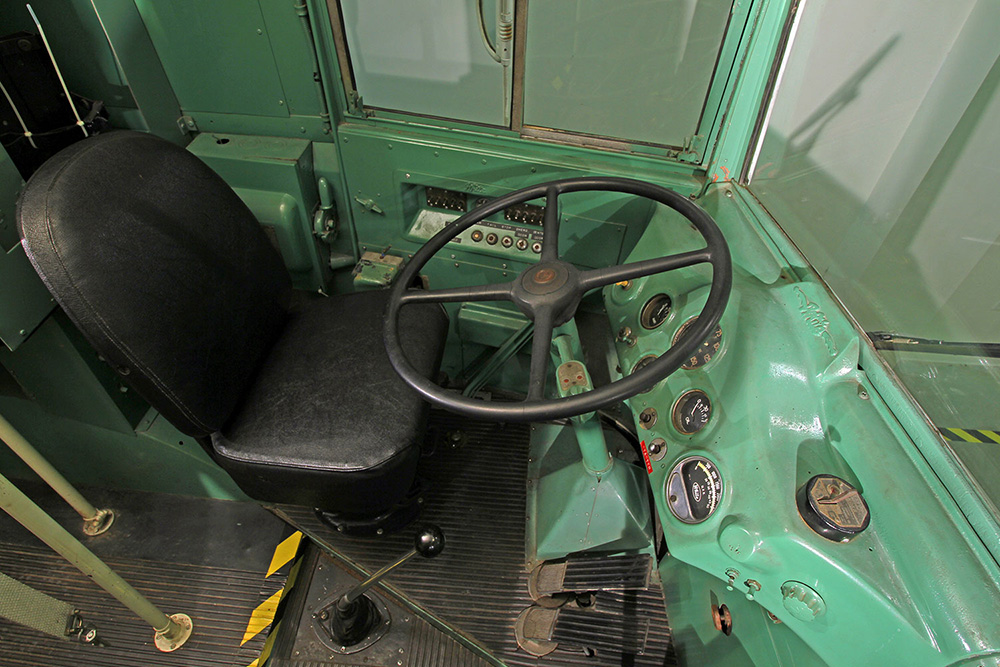 In 1944, the Post Office began to make plans to add new routes after the war ended. With new routes, they needed new buses. While they were overhauling older buses, bus #1, after having $490.20 worth of touch-up work done, was shuffled around to different routes to serve as a secondary backup bus. Officials had decided that each route need at least two buses to handle the miles and wear and tear. Some routes that were longer may have three buses to handle the need and would be rotated on an as needed basis.(5)

After 15 years and almost 750,000 miles, HPO #1 was retired. Many of the buses were being sold to salvage yards and bus companies. There was discussion in the Post Office Department as to what to do with the original bus. Scraping it would only bring in $200 and trashing this iconic piece of history seemed a tragic waste. The final decision was to donate the bus to the Smithsonian after the Post Office restored it at a cost of $500. The Post Office agreed to house the bus until the Smithsonian was able to take it. A resolution to this affect was approved in Congress and on November 7, 1955, the White Company bus was taken out of operation. For the next ten-year, the bus would be housed under the control of private donor, Robert J Mouré.(6) In 1968, the bus was finally given to the Smithsonian and sent to the Institution’s storage facility in Silver Hill, Maryland. 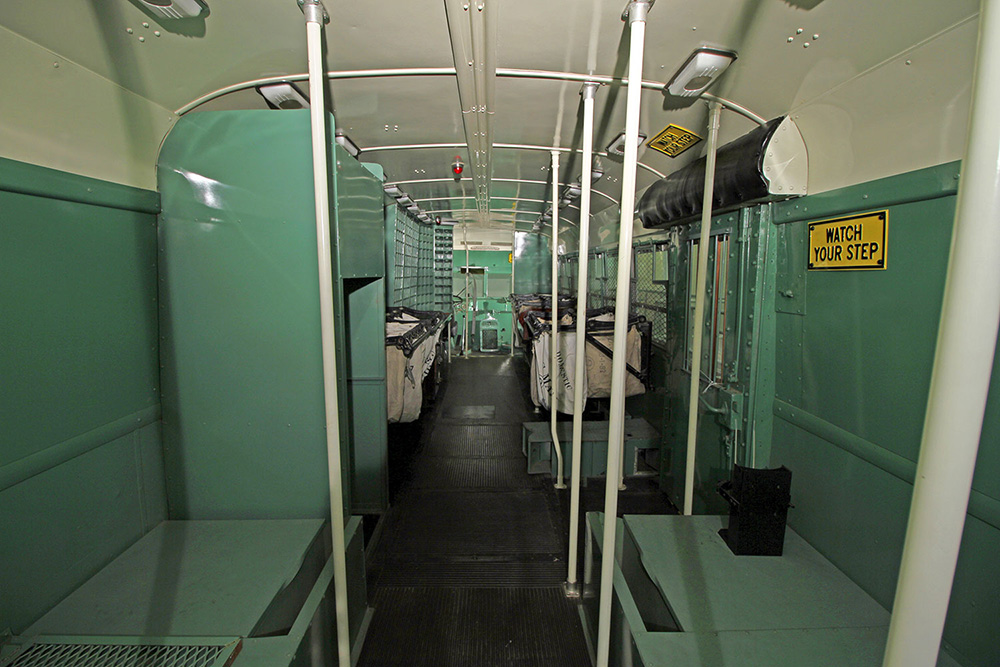 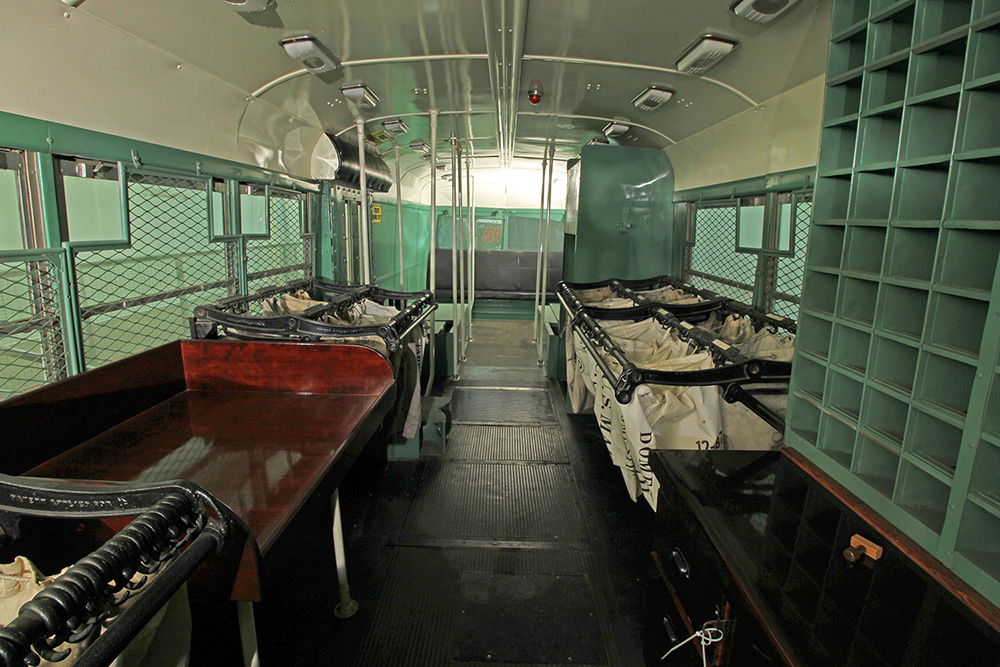 View towards the back of the bus from the driver’s area.

Unfortunately, years of storage in the outside elements were not kind to the bus. It would take lots of time and money to fix it up again. The United Federation of Postal Clerks, AFL-CIO, the union under which HPO clerks operated, decided to donate fund to restore the bus to its pristine, original condition. The bus needed both cosmetic and mechanical repairs. Conservators estimated that the work could be completed in two phases. Estimates for both phases were set at $60,000.

The bus needed new windows, paint, knobs, engine, seals and much more. (7)The Smithsonian and the union wanted it to be a source of pride. The work was finally completed in 1988. Curator James Bruns said at one point “Our collection of postal history should reflect the evolution of the transportation of American mail…. The highway post office was an important part.” (8) After the restoration was complete, the Smithsonian National American History Museum funded a reenactment trip of the original route from Harrisonburg to D.C. It was a one-time event, and the Postal Service created a special cancelation for the event. Visitors were able to tour the bus and talk to American Postal Workers, who would be on board sorting the mail much like they did in 1941. Rita Moroney, historian for the U.S. Postal Service, gave the Smithsonian a one day contract to deliver the mail, with the assistance from the post office.(9) 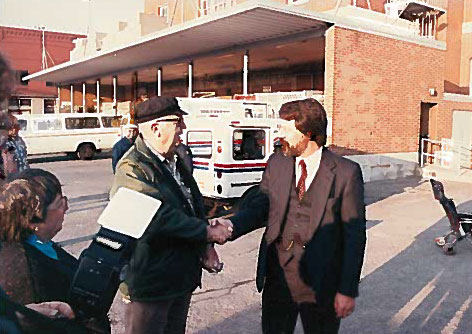 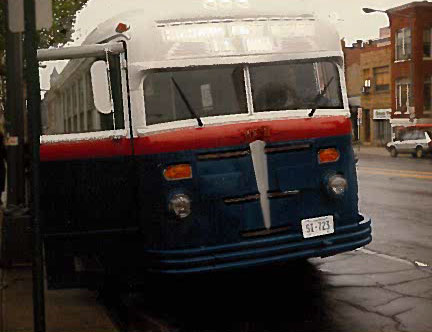 The refurbished White #1 bus in Lacey Springs, VA on the 1988
historic trip 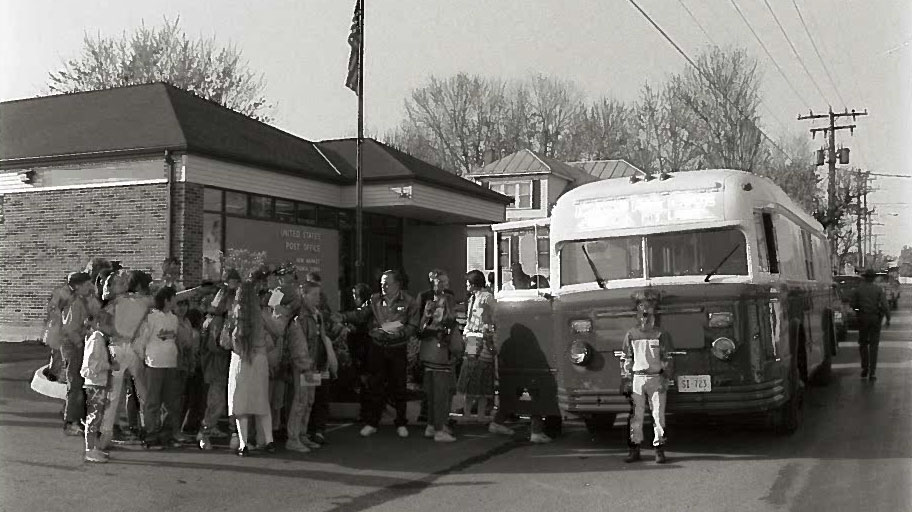 In conclusion, the Highway Post Office offered the American people a reliable method of mail transportation. The HPOs were one step in the evolution of mobile sorting units. The first, and most successful, attempt used clerks on board specially-designed railroad cars to process mail while moving across the country. Other options, including Collection & Distribution wagons, trolley cars and airplanes, were tried over the years, with varying levels of success. Highway Post Office buses brought the efficiency of the Railway Mail Service to the highways as railways pulled back their service. While HPOs succeeded in their tasks, they were overtaken by the next step in mail processing progress – moving processing services back into stable buildings where a single piece of machinery could do the job of dozens of buses. The HPOs became irrelevant to moving the mail but not irrelevant to postal history. This White Motor Company bus, aka HPO #1, was a crucial part in this story. After thousands of miles and deterioration, the bus is fully restored and safely housed in storage. This piece of postal history has been preserved for the future.

Highway Post Office Buses
‹ Automation and Decline up
Back to Top