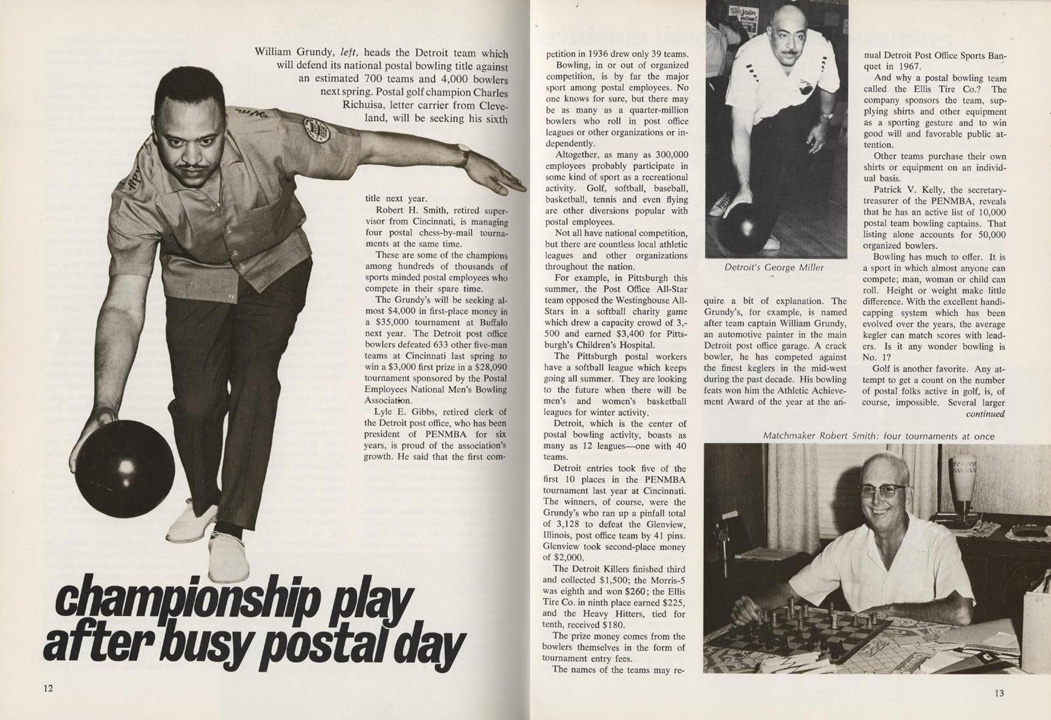 PENMBA Bowlers compete at the Detroit tournament in 1968.

Bowling was also a popular sport among postal employees starting in the early 1900s. The practice began very similarly to the baseball teams in that they played other local non-postal employee teams. The Post Office League in Tacoma, WA existed as early as 1917.(1) By 1935 there was enough interest and teams for the Postal Employee National Men’s Bowling Association, PENMBA, to be created. The first tournament in 1935 was held in Terre Haute, IN and was attended by thirty-nine teams. PENMBA has since held seventy-two tournaments across the country. Today, the organization has evolved into the Postal Federal Employees National Bowling Association, PFENBA, and is open to “Postal and Federal employees, members of the armed forces, and retirees from the postal service, federal sector, and military,” not just male postal workers.(2) Each team must consist of five men or women, with at least three current or retired postal, federal, or military employees. A list of each year’s tournament location and winners can be found on their website.

By 1969 Postal Life declared bowling to be the most popular sport among postal employees.(3) It was guessed that as many as 250,000 postal employees participated in some sort of bowling activity, either in postal teams, other organizations, or individually.(4) Specifically for PENMBA, however, the Secretary-Treasurer had an active list of at least 10,000 postal team captains—meaning at least 50,000 postal bowlers—in 1969.(5) Around this time, Detroit was the center of postal bowling activity.(6) There were as many as twelve leagues, including one with forty teams. Detroit also took half of the ten first places at the tournament in 1968 in Cincinnati.

The same Postal Life article makes a point of explaining the ways that the accessibility and ease of bowling increases its popularity: “It is a sport in which almost anyone can compete; man, woman, or child can roll. Height or weight makes little difference. With the excellent handicapping system which has been evolved over the years, the average kegler can match scores with leaders. Is it any wonder bowling is No. 1?”(7) With such an accessible and fun sport, it is easy to see the draw that postal workers would find.

‹ Sports up Ice Hockey ›
Back to Top