The rise of the large manufacturer pushed many small businesses aside. However, there remained a market in miscellaneous supplies for rural carriers. Companies offered items such as stamp boxes, postal scales, gas stoves for sleds, odometers, mail cabinets, and report slips. One company, Laughlin, specifically marketed specific fountain pens to rural carriers, stating that “every carrier needs one.”(1)

In addition to direct marketing to a specific audience, companies were beginning to expand both the “who” and the “how” behind their marketing tactics. Rather than only marketing products to carriers, many companies saw an opportunity to use carriers as a medium to showcase or advertise their products to the rural patrons. In the service’s early years, patrons asked rural carriers to complete tasks for them back in town, recognizing them as both trusted members of the community and agents of the government. Although a misconception of the mail carrier’s official duties, a number of carriers took the opportunity to sell more than postal products along their route in order to supplement their salaries. As a result, ads sprang up in RFD publications asking carriers to sell products on behalf of various companies. They offered to send the carriers sample cases and asked for trade information from the locations they were traveling to. Postal officials quickly ruled such extra-curricular businesses to be inappropriate and warned carriers they put their carrier jobs at risk by taking part in such activities. 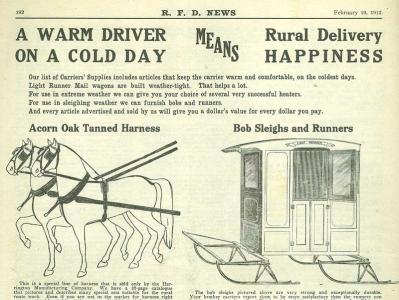