One of the largest burdens that fell to the rural mail carrier was instructing rural patrons what to expect from the new service. The early years saw many rural patrons using an array of random contraptions as mailboxes, making general mail deliveries difficult for the carrier (and, depending on the remaining contents of the box used, sticky or messy for the patrons). Families hung up old oil cans or tins of syrup and honey to receive their mail. In addition to using whatever spare box might be in the house or barn, rural patrons were wildly erratic in placing their mailboxes. As a result, too many carriers had to dismount or get out of their wagons or sleds to hunt down a family’s mailbox. Postmasters across the country appealed to Washington to set national standards for rural mailboxes.

In response the Post Office Department asked families to follow certain mailbox requirements, specifying mailbox height and distance from the road. During the first few years of RFD service, “most of [the rural families] complied with the request but with boxes of such odd shapes and sizes and varying degrees of stability that the roads on which the boxes were located became a case study in individuality.”(1) This spawned the plethora of mailbox advertisements in mail publications.

Mailbox ads came in second behind vehicles in both the volume and size of the ads that appeared in carrier and postmaster associations’ publications, but held just as much brand diversity. Mailbox manufacturers understood that rural carriers would be the ones most families would turn to for recommendations of the best mailbox to use. Between 1903 and 1904, nine companies were peddling mailboxes of varying styles. Many advertised mailboxes that were weatherproof, or opened at the top, emphasizing accessibility and convenience for carrier and patron. The Century Post Company noted in one ad that “carriers can operate this box without stopping his horse.”(2) 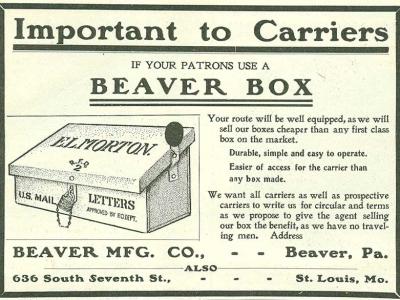 ‹ Miscellaneous Other Items up Mailboxes ›
Back to Top