Your hands connect the town and country—their mission is a big factor in the work of the world today. The makers of Hansen’s Gloves realize this; they make gloves that are built for your hand, so that your important task can be done with the greatest swiftness, ease, and accuracy.
–Hansen’s Gloves advertisement, R.F.D. News, February 5, 1912

As representatives of the Post Office Department, Rural Free Delivery carriers were required to maintain a nice appearance; however, there were no systemized uniform requirements for rural mail carriers. Thus, as part of the rural mail carrier’s free reign over their equipment, their choice of material and clothing was entirely of their own making. Many carriers chose no indentifying pieces of clothing at all, preferring to make their daily rounds in their regular clothes. Others looked to add something official-looking to their outfits, including a minority who chose to adopt uniforms similar to their city delivery brothers. Early commercial advertisers within the clothing and textile business saw it as an opportunity to reach out and market to these carriers. After all, there was already a successful uniform market among the city carriers.

Ads began to appear for full RFD uniforms and uniform textiles, with The Fechheimer Brothers Company, The Cincinnati Regalia Company, and The Pettibone Brothers Manufacturing Company the most commonly advertised companies in carriers’ magazines and newsletters from the early 20th century through the First World War. The companies’ marketing tactics included articulating the sophistication and importance of handling the nation’s mail. Ads used sprinkled words like “regulation” and “official” into their ads. Such advertisements grabbed the attention of the informally attired rural carriers. Lacking a mandate for a national uniform, some rural carriers may have felt the department and public did not value their work as that of the well coiffed and uniformed city carriers. Attention-grabbing words included those that all carriers would consider important characteristics. For instance, the Fechheimer Brothers Company specifically listed “economy, comfort, durability, [and] serviceability”(1) as part of this marketing tactic.

Furthermore, these companies emphasized the price and quality of their materials, peppering ads with testimonials and declarations of popularity. “Used by over three fourths of the letter carriers”(2) read one Royalton Woolen Company advertisement. Additionally, Jacob Reed’s Sons, a smaller, family owned company, declared that their RFD uniforms would “outwear two uniforms of the kind usually sold.”(3) These campaigns highlighted the lengths of manipulation that went hand-in-hand with the lucrative opportunities embedded within this budding market, and these companies were not shy about jumping at the chance to exploit it. 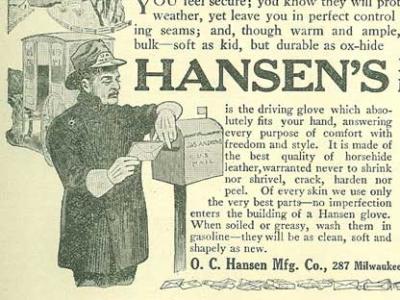