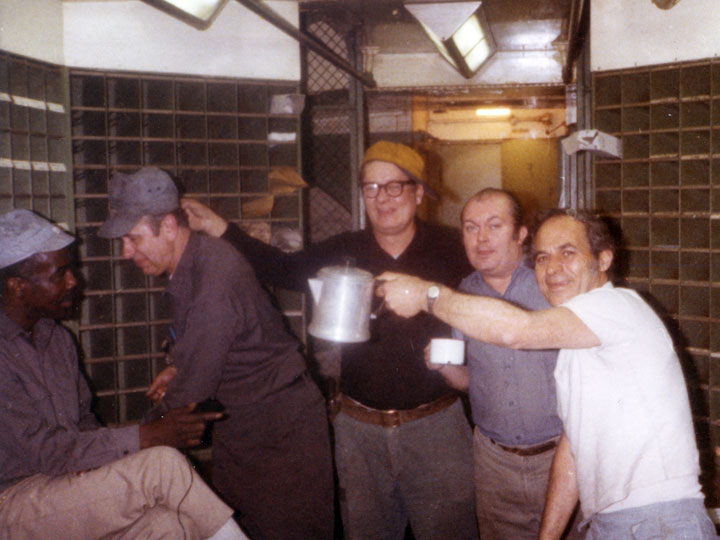 Clerks on an RPO enjoy each other’s company. Courtesy of the family of Stephen T. Whitehurst, Levittown, PA

“The guys liked to play different kinds of jokes like that, all of them, good sports about it. It was just, we became very close out there. We were together for about six days and nights, and you just became like a big family.” —Daniel Moore of Grafton, West Virginia

Life on the trains wasn’t just the same old routine day-in and day-out. Aside from the dangerous hazards of fire and train wrecks, and the off-the-wall packages of eggs or human remains, Railway Mail Clerks also had to deal with the frenzy of the winter holidays. From early November to late January, the Railway Mail Service expected high mail volume, known as heavy mails while summer months experienced lighter mails. Some RPOs added extra staff to runs in the winter and cut down in the summer. But it was the unexpected bursts of heavy mails that were the hardest to deal with. Mail volume was always monitored and recorded because the public cared about speed.(1)

“We were like brothers.” —John Sipko of Johnstown, Pennsylvania 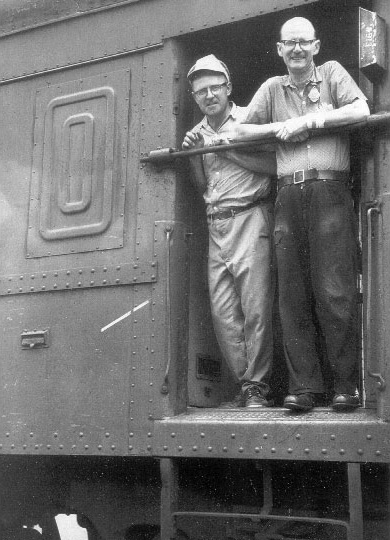 Clerks stand with a catcher arm in the door of an RPO car. Courtesy of Daniel Holovach of Toms River, New Jersey

Railway Post Office clerks loved the adventure of working the railway mail. The challenge of working the mail on moving trains really motivated many clerks to take the job. There was also the appeal traveling the United States. Aubrey Booth of Forest, Virginia, remembers stopping in Washington, D.C. on his run. He saw President Johnson and Senator Robert Kennedy.

Aubrey Booth:
Another thing that comes to mind is when we saw President Johnson one time down at the train station, Union Station, and, and sometimes I had some free time when I was in DC. I went up there to Congress and I met Robert Kennedy one day. And he says, “hello, how are you,” with that Boston accent, and shook his hand, shook his hand, didn’t talk to him, just passed him in the hallway. And, oh, another thing I was going to say about the train going from Washington-Bristol. It went on, that train went on to Memphis, Tennessee. And we, I think, I don’t know how often it was, maybe once every couple of weeks or once a month, we would haul new money from the Federal Reserve money, I don’t know which Federal Reserve, it was going to the Federal Reserve Bank in Memphis, from the printing office down in DC, and we had, it must’ve been 25-35 bags of new money. Of course it was all cash, and loaded, had it loaded right there on the train, they loaded in one end of the car. So there was no telling how much money we carried on the trains.

Listen to Ed Levy’s experience in the cramped cars.

INTERVIEWER:
All the crews, all the guys got along together pretty well?

Ed Levy:
Oh yeah, yeah, very well. You had to, of course you were in close quarters and inside there was a 60 foot mail car, I think it was across, the width was I think about 8 foot, and you had a whole bunch of men in there, we had as many as 12 men, 13 men in there working, working the letter cases, working pouch tables, working paper tables, you know, distributing mail on the way up and on the way back.

Listen to J. Greg Lowell talk about his experience with friends on the trains.

J. Greg Lowell:
Well, you packed your lunch usually because there wasn’t any place to eat, you know you had to take a lunch with you, and you know you’d carry a grip and a little suitcase, with a change of clothes so you would put on work clothes, you’d go down there in casual clothes and change in the mail car and, I subbed for as long as I could, which was, the ideal situation at the time because you could get all the hours, you could handle if you got the job, and the best I ever did was, 160 hours in two weeks. And, but it was a lot of fun because it was interesting, and you know there was no two trips exactly alike, and I had, you know I ran thirteen different states, because when I was subbing, because if you headed out of Chicago, and you know, went to Buffalo, to Memphis, to St. Louis, to Cincinnati. You know, make a 500 mile ring, and that’s where the runs usually terminated. And the pay was decent and the work was hard, and there were, everybody out there worked, you know, and somebody got finished with their job they helped the other guy, so it was, a lot of camaraderie, and the, if you didn’t, if you weren’t a good worker, the supervisor would make a notation on that and you wouldn’t last too long. 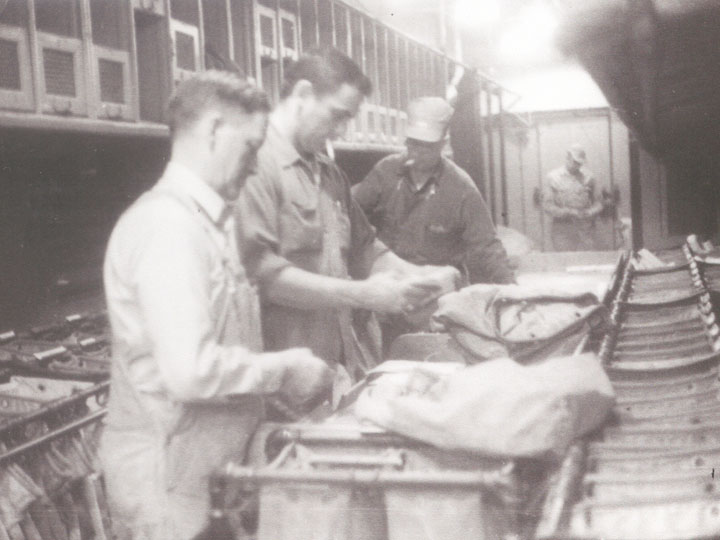 Clerks work side by side in tight quarters. Courtesy Donald Bliss of Burlington, Iowa

Robert Butler of Falling Water, West Virginia, often designated some of his trip money to see the New York Yankees play or to catch a matinee on Broadway, when he was in New York City. Jack Karrick of Florence, Kentucky, remembers, “Being free, seeing things move around you and you know, I mean, it’s all a kind of a romance about it.”

Perhaps the most remarkable and special part of the Railway Post Office was the camaraderie that developed between the clerks. Because these men spent so much time together on the trains, and because they shared such close quarters, they became very close, almost like family. RPO cars were packed tightly with letter cases and pouch racks, and equipped with lavatory facilities because the trains ran so long without breaks. Clerks worked together to sort and deliver the mail speedily.

“The camaraderie I thought was super. Though you had a couple of fellows who wouldn’t get along together, and wouldn’t talk to each other, but for the most part, it was a well oiled machine, I think, we took pride in our work. And I will always be proud to have been a Railway Mail clerk.” —Edward Rountree of Jacksonville, Florida 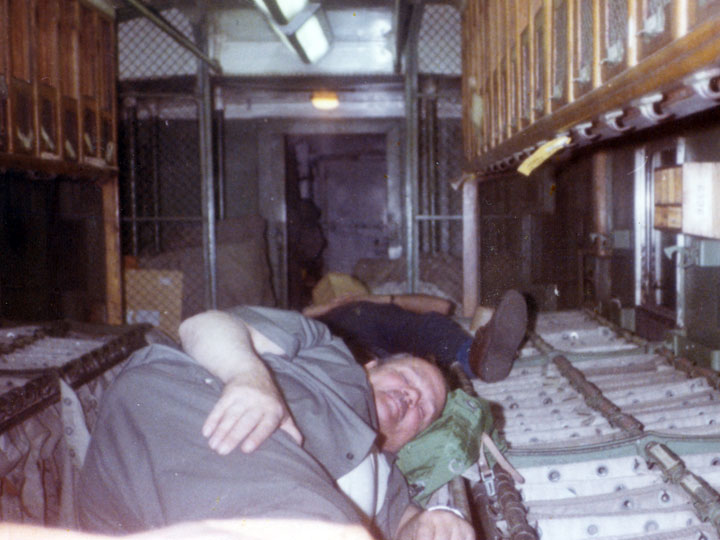 Clerks catch some ZZs on the pouch racks. Courtesy of the family of Stephen T. Whitehurst of Levittown, Pennsylvania

‹ Time-Off, Schemes, and Exams up Love this Job ›
Back to Top