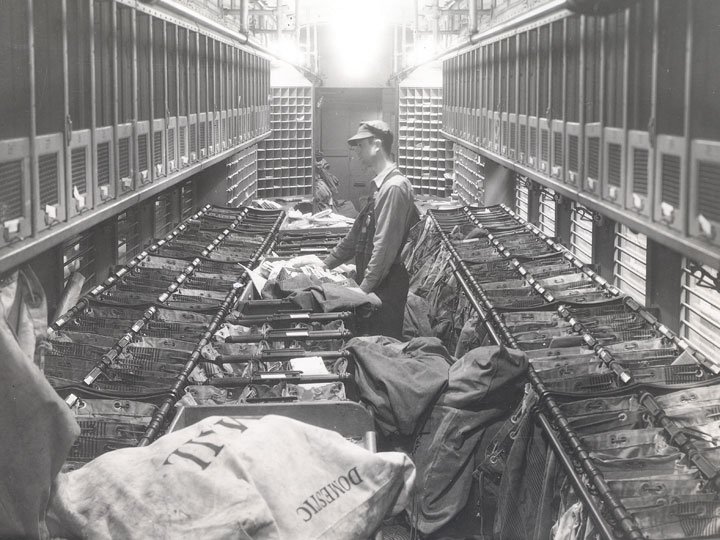 This clerk had a big—and cramped—job ahead of him, sorting the mail.

“I had to study exams. For each state I, oh I put up examinations so I could sort mail and I knew every post office in Pennsylvania, Ohio, and Illinois. I even studied Texas sometimes, so yes, I had to study and put up exams, in other words, so I had to learn how, what post office, how you’d reach the mail, you’d reach different places.”
—Ernest Kruis of Altoona, Pennsylvania

Clerks worked runs that could last five or more days. They often left for a run at nightfall, worked all night long and slept only when they were “up” on their mail. So much time away from home sometimes put a strain on clerks’ families who had to adjust to an unusual schedule. Many women relied on other family members to help care for their children while they worked. When the clerks came home, however, they often spent all of their time off with their children. Susan Leidy, daughter of Kenneth Leidy who ran New York to Pittsburgh, remembers that on his off days he was with her and her sister 24 hours a day. When he went away, they always knew he would be back soon.

Listen to Thomas Collins of Deer Park, Texas, talk about being away.

Thomas Collins:
Well, my wife was always complaining about it. She said, you’re always gone. If you think about it, when I first started on the Baton Rouge and Houston, like I said I was home an awful lot. Now when Mr. Eisenhower became president he appointed a postmaster general by the name of Summerfield and he did away with Sunday service. And that meant instead of going to work on a four day head out, we went on a three day head out, so I was gone more after that. You think about it, even on a three day headout, every three weeks I was off five days in a row because I didn’t go Sunday. We alternated on the night train and the day train, we alternated who went on Sunday or Saturday night and you didn’t come back home ‘til Monday.

While RPO clerks worked abnormal schedules, they quickly adjusted and made good use of their downtime between shifts. Aside from playing with their children or spending time with their spouses, many clerks worked second jobs to make a little extra money. Clerks were paid for a 48-minute hour, which compensated for the studying they did between shifts. RPO clerks were expected to have working knowledge of hundreds of post offices. Not only did they know all of the post offices on their runs, they also knew all the post offices connected to the train line. They had to know the fastest way to get mail to its destination. For a letter going from Boston to Kansas City on a train moving from Boston to Washington, DC, clerks had to know which train lines intersected with theirs and when. Did that letter have to go to onto a train in NYC? Philadelphia? Washington? What was the best way for that letter to get to Kansas City? Keeping it all straight meant practice, practice, practice. Clerks prided themselves on their accuracy and the speed with which mail was moved. 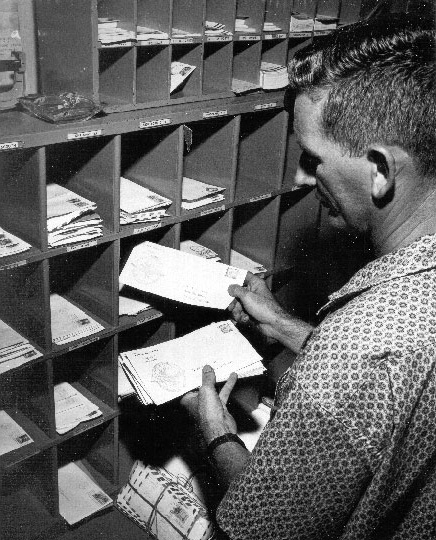 Railway Post Office clerks were tested about every six months. Joseph Beauchemin remembers working out of New York City. He said, “We were given exams too, and if you didn’t pass the exam at 99%, perfect, they’d take you off the Railway Mail, so that was a pretty tough test. You had to know all the transportation plus the streets and where they went to in Manhattan. You had to study all of these at home, and that’s why we used to get extra money. We used to have a card and we used to practice until we memorized all this stuff so we could sort it on the train because you can’t study on the train, you had to do the work, you know.” Accuracy mattered just as much as speed and clerks were embarrassed if their mail was delivered incorrectly. Incorrect sorting could also result in demerits against clerks. Facing slips were attached to each bundle of letters. These slips were signed by the clerk who sorted each bundle so anyone who made a mistake could be easily identified.

Listen to Donald Bresland of Springfield, Vermont talk about the tests.

Donald Bresland:
And when you took a test you’d have to take… I can’t remember when the tests were… every three months or ever six months but you’d have to go to the head office and take a test, and they’d pick up 100 cards out of the whole state. You didn’t know what 100 cards it was, and you had to get a 97 or you’d have to take the test over again. And, like I say, some of them had, some of the states were so big that they were divided into A, B, and C and probably to come back was the same way. You really had to know everything, absolutely every little town and what they called “nixies” there too, they weren’t post offices but they were little towns that, you had to know which town that mail would go to.

“At first it was difficult because I was away from home, you know, my wife was alone with a couple of kids, so it was difficult but after a while once you got into the routine of it, it was great. Because she worked and I was home for a whole week at a time, you know.”
—Ed Levy of Tamarac, Florida 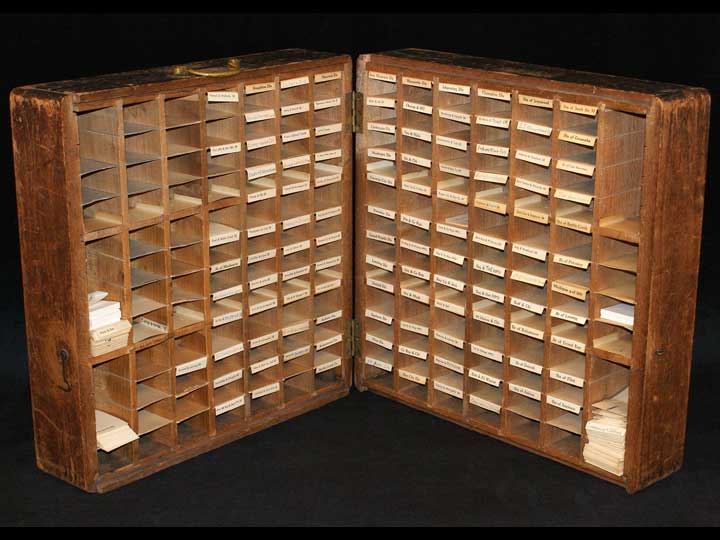 This RPO practice case is set up for a clerk to practice his skills in sorting mail for Michigan towns.

In the 1890s, Chicago Railway Post Office clerk Frank H. Galbraith, (who later became the superintendent of city mails in Chicago), created a series of eight visually-entertaining maps to help clerks memorize Midwest train routes. Galbraith did not publish these maps, but rather rented them out to clerks. Not every town along a train route was represented by an image, but Galbraith did his best to create an image for as many towns as he could. The town of Advance, IN, for instance, is represented by a soldier marching forward. Galbraith’s images ranged from the expected (a bison for Buffalo, IL) to the wry (the image of a whiskey jug to represent the Illinois town of Sweet Water). A number of Galbraith’s tiny illustrations are less familiar to modern audiences. For instance, the scales used to represent Warren, MO, may not make sense unless the viewer remembers that Earl Warren was the Chief Justice of the US Supreme Court at the time the maps were created.