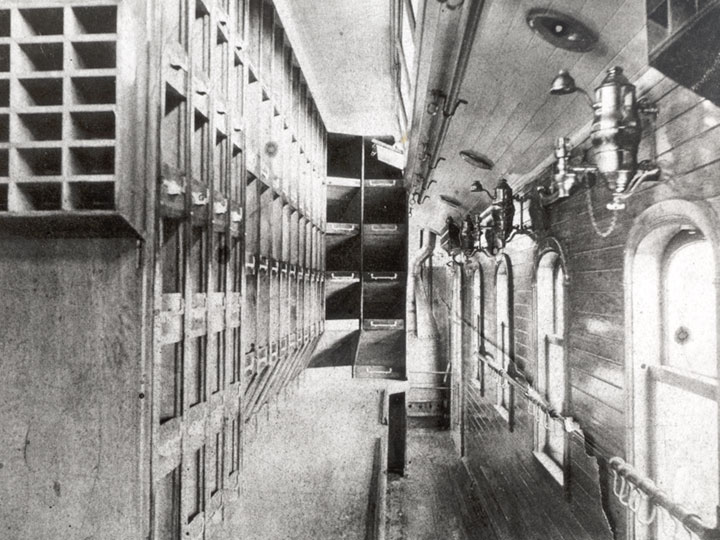 At the inception of the Railway Mail Service and prior to that, train cars were made primarily of wood. This was problematic and caused huge risk of fires. This issue was even more imminent for the Railway Post Office cars, which were located directly behind the locomotive and tender and were therefore very susceptible to fire. The mail car was placed there in order to protect the passenger cars that were further behind the RPO.(1) If a spark from the engine flew back toward the mail car, fire could break out. The biggest causes of fires in RPO cars were their oil lamps or wooden stoves being upset in a wreck or quick stop, tossing fire into what was nothing less than kindling all over the car. This was hard to avoid though, some thought, easy to prevent. As the problem grew, many advocated for steel cars, in hopes that fewer lives—and less mail—would be lost. Not only was steel less likely to catch fire, it was also much stronger and was less likely to damaged in a wreck. 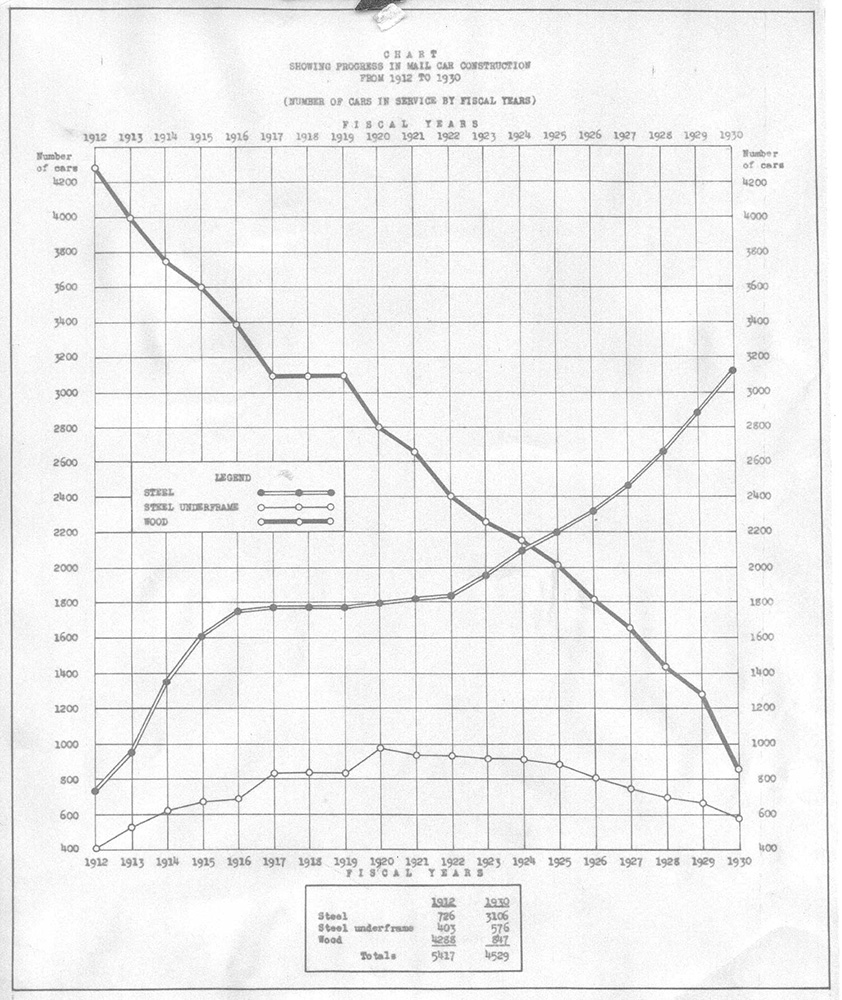 This table shows the immense growth in the use of steel for construction of mail cars. Courtesy of the National Postal Museum Library, Smithsonian Institution Libraries

In 1853, a train carrying mail in a freight car caught fire in the night, en route west from New York. There was scarcely any mail to speak of after the blaze, which incinerated many business documents, including invoices, drafts, and acceptances. Because of the speed of the train, shouts to the engineer warning of the fire were made in vain. The wind caused by the train also fanned the flame, causing massive destruction before the fire was noticed by the brakeman.(2)

Other such instances helped push railroad companies into building steel cars. Suggestions were made to shift to some kind of fireproof material in car construction.(3) Although the most commonly suggested material was steel, some suggested fireproof wood. The argument was made that, “a mail car with the floor and framing built up of channel-iron and angles, and with sides and roof of sheet steel, would not only be proof against absolute loss by collision, but would of course be completely fireproof.” (4) By 1922, 53.9% of cars had steel underframes or were made entirely of steel.(5) Even though steel was undoubtedly safer than wood, railroad companies, which owned the actual cars, continued to produce and use wooden cars because it was less expensive than shifting to a fireproof alternative.(6)

Listen to Robert Hammond tell the story of a fire on one of his trips.

Robert Hammond:
I was also in a fire one time, by the way. A mail car burn up in Gainesville, Georgia. We were going north out of Atlanta, and we had had a three hour advance time sitting in the station where we worked our mail from Atlanta, and from south end connections. The railroad came in with blow torches because it was extremely cold, it was maybe in the teens, and they were trying to thaw out the pipes underneath our car, so that we could get some heat. And they did thaw them out alright, but they also started a smoldering fire and it broke through the floor at, I’m trying to think of the name, at Chickapee, Chickapee, Georgia right south of Gainesville, and the entire car burn up. We managed to stop the train and get out, and we got out, we salvaged 17 pouches of New York City mail from one end of the car, other than that everything burned up, including literally thousands and thousands of dollars of coin that was going to banks in north Georgia.

‹ Wrecks up Robbery ›
Back to Top