Railway Post Office (RPO) clerks processed mail on moving train cars. It was hard and dangerous work. Railway mail cars were often placed directly behind the engine, putting clerks in danger during wrecks. Companies used wooden mail cars that were not as safe as metal cars, but were cheaper. These cars often turned into death traps after a wreck, filled with scalding water from steam engines or set ablaze when oil lamps and wood stoves tipped over or exploded on impact.

“When you are in a mail car and suddenly see all the letters flying around like pigeons, and there are ties and broken rails going past the windows, you can be sure there’s going to be a wreck on your line. And that you will be in it.” —Daniel Moschenross, clerk on Toledo & St. Louis

Train wrecks were a serious problem for all railroad employees, but particularly for Railway Post Office clerks. Because RPO cars were located directly behind the locomotive and tender, mail clerks often took the brunt of the impact in collisions. Wooden cars often ended in fiery blazes or in total destruction. In 1893 the Second Assistant Postmaster General stated to Congress, “The work [of the RPO clerk] is performed in the midst of danger. The cars in which the distribution is made are run in nearly every instance next to the engine, which is the most dangerous position in the train, and they are more liable to be wrecked, burned, or submerged in water when accidents occur than the engine, baggage, express cars, and passenger coaches.” This was obviously detrimental to the workforce, as many were injured and killed. Between 1890 and 1901, there were 6,089 accidents involving trains with full or apartment postal cars. In those same years, 86 clerks were killed and 617 seriously injured. Between 1902 and 1905, there were 1,403 injury-causing accidents. 56 clerks were killed and 381 were seriously injured. According to the same Assistant Postmaster General, “a larger percentage of railway postal clerks are killed and injured annually than all other employees upon trains to which the postal cars are attached.” 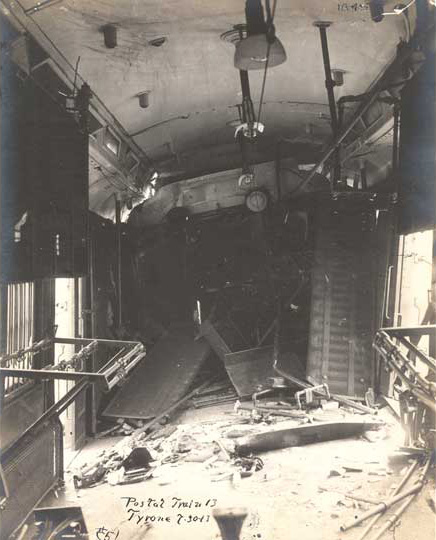 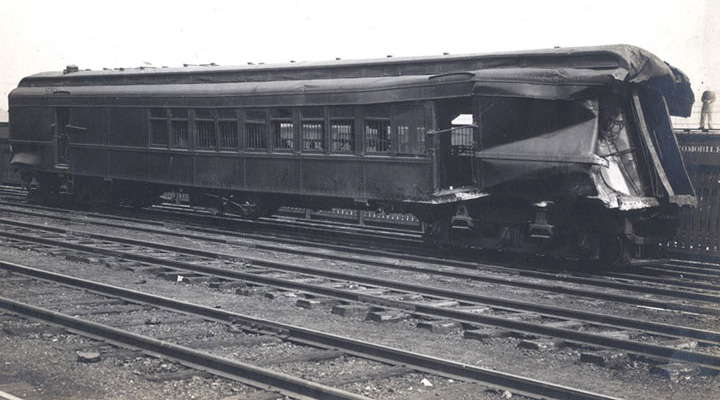 The deaths suffered by clerks in wrecks were often excruciatingly gruesome. Theodore F. Wedemeyer was involved in a derailment that ended in the mail car completely upside-down off the tracks. The steam dome in the engine burst, sending steam and mud in the direction of the clerks aboard the train. Many, including Wedemeyer endured scalding burns. Just 44 days later, Wedemeyer died in a collision on the Cheyenne & Huntington.(1) Many wrecks ended in complete wreckage and no survivors. 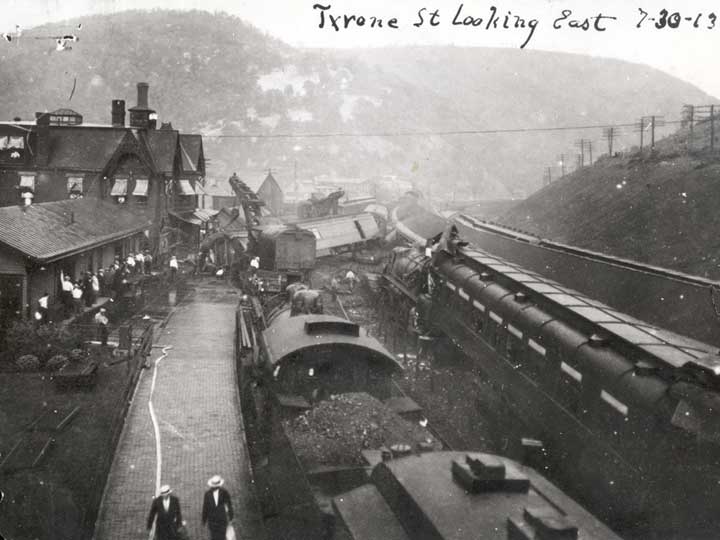 An aerial view of a train wreck from 1913. Courtesy of the National Postal Museum Library, Smithsonian Institution Libraries 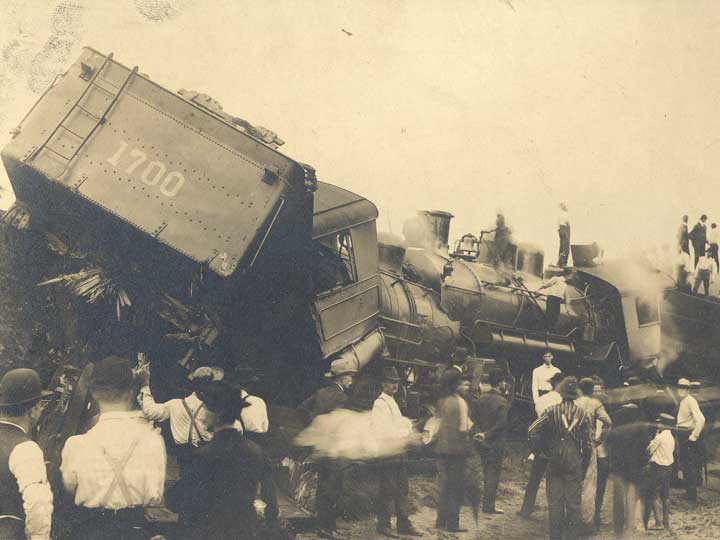 As clerks became fed up with the large number of casualties and injuries they saw on the job, they began to organize to make a change. The Railway Mail Mutual Benefit Association (MBA) was formed in 1874 and sought to offer low rate life insurance to mail clerks. It offered $2,000 to the beneficiaries of any covered person who died on the job.(2) Additionally, the MBA lobbied for legislation for better wages and improved working conditions.(3) When Congress unexpectedly cut pay on two levels of clerks in 1886, the Brotherhood of Railway Mail Postal Clerks formed to combat the change. 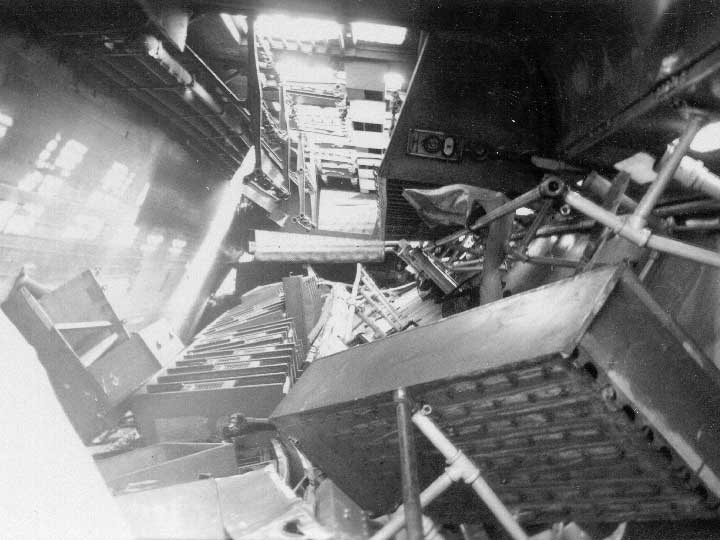 Interior of a wrecked train car. 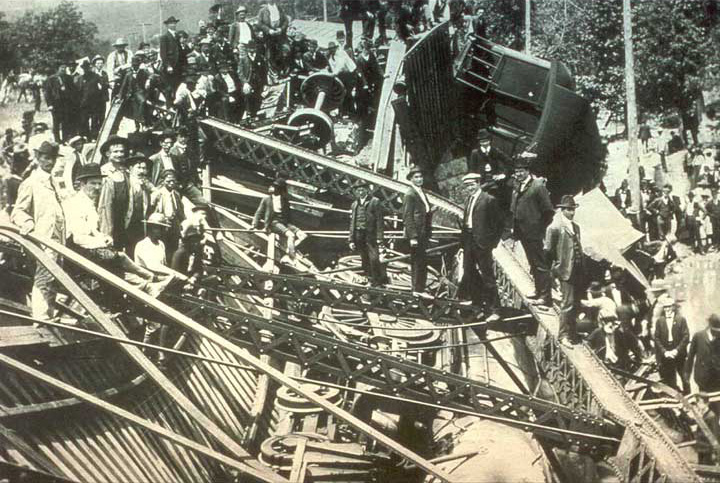 Men standing on a weekend railroad.

The number of wrecks dropped off significantly as the Twentieth Century progressed. This was mostly due to new technology in train construction. In addition to the advent of steel reinforced cars (see FIRE!), many advancements were made in the first half of the 1900s. These advancements included the double track, heavy rail and ballasts, air brakes, and the automatic block system. All of these changes meant safer trains and RPOs.

Here are more stories of train wrecks, as told by the former clerks who lived to tell about them:

Richard Wood:
Well, I was in a wreck a couple of times. Once, we went sideways in a steel bridge going over a river, and tipped over on our side, skidded up the track like that. And another time, some railroad guys threw the wrong switch and we went right into a side and then hit a freight train. And, that was kind of… but I didn’t get really hurt. One guy got hurt pretty bad, he got tangled up in the racks inside the mail car and broke his arm, but other than that... Oh, and I was in another one! It was a small, one man job between, this was back when I was a sub, it was between, let’s see, Montpelier, Vermont, and Wells River, Vermont. Just a short run, a one man job. But anyway we went off the track and tipped over, and we had just picked up, in the baggage car, a load of cottage cheese, filled the baggage car right full of cottage cheese, from Cabot Creamery. And in order to get out after the train tipped over, I couldn’t get out the door, I had to crawl through that car, with the cottage cheese, and the cottage cheese had all spilled, I had to practically swim through cottage cheese to get out of there. That was a bad accident. We hit a car, that’s why we went off the track, killed two guys, and then there was another guy badly hurt on the train.

Ira Daniels:
I was in a train wreck one time [laughs] and it was in Lenoir City, Tennessee, about 25 or 30 miles out of Knoxville. And it turned over and mail was everywhere. But, nobody was hurt real bad. Lord, you shoulda seen it. It took us hours and hours to pick all the mail back up, all the letters picked up, and after they got the mail car uprighted, you know, we were there for most of the day. It happened about around probably 10 o’clock at night or something, 9 or 10, and we was there ‘til the next afternoon. It was a mess to clean up. We finally, the afternoon train picked us up and we went on to Bristol, but it was harrowing. But those trains went pretty fast. Fortunately we weren’t going that fast then, we were just leaving the station. We were picking up speed, of course. But, it was a different kind of life, I’ll tell you.

Gayle Hagy:
I was in one wreck. It was on the Bluefield and Norton, and this was at Richlands, Virginia, they run us in on a side track for a freight train, but it just happened to be some cars on it. Didn’t hurt me, but I looked up and here come the water cooler, and down the aisle with ice falling out the top of it. You were on the floor, there wasn’t any place to go. I didn’t get hurt. One guy I was working with got hurt, but not bad, went to the hospital, had sutures, but I didn’t get hurt.

Glenn Olson:
Yes, we did have a wreck going out of Chicago one night, and that was pretty scary. Afterwards we laid over on our side, and fortunately there were just, people mostly shook up, there was one fella who had a little injury, but, and I guess after, once you have that then, that was my first trip on that particular train, and, but then every time you go a crossing or throw a switch or something like that you’d kind of tighten up for a while because it was a little scary after being in a wreck like that. But we, we survived no problem. But that was I think most of the hardest, the scary part of it, as far as that goes.

Aubrey Booth:
But one thing that stuck in my mind was, let’s see, it was in Alexandria. We just left Washington, and the train… let’s see we hit a car. T-boned a car at a crossing and the supervisor and myself ran up there to see but the guy, he was dead, I looked out the window and I could see the tail-end of the car, and went across to the other window and looked up and saw the front-end of the car. He just t-boned it right in the middle. And, that was the only time I remember but I only served 4 years on the trains.

‹ Danger on the Rail up Fires ›
Back to Top