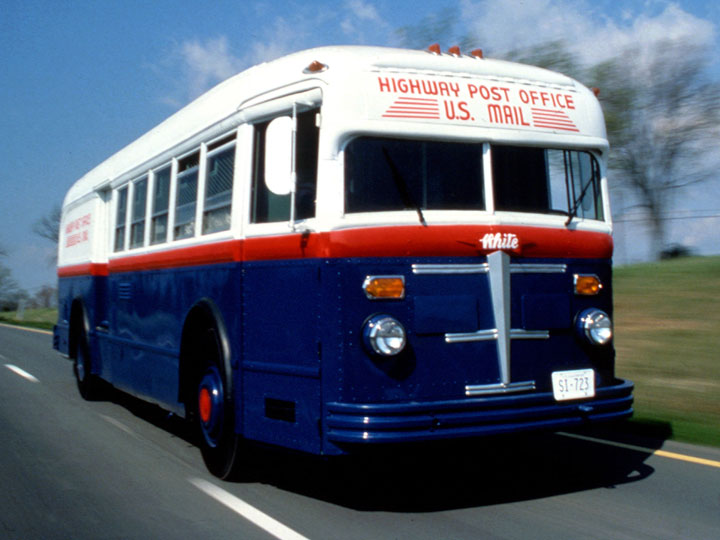 The nation’s impressive new interstate highway system and the lower cost of moving mail by horsepower did convince postal officials to load more and more mail onto trucks. But trucks weren’t the most intriguing next step in moving mails along America’s highways. That would be a new version of the Railway Post Office itself, RMS service in the guise of a highway-traveling bus. 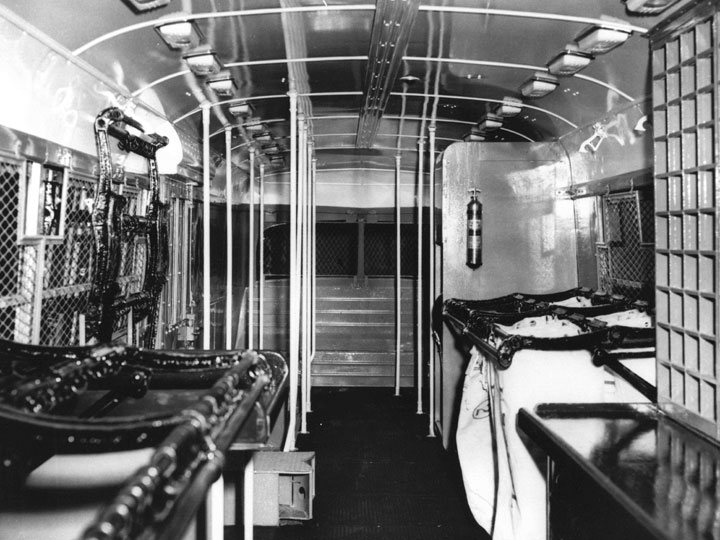 The first Highway Post Office (HPO) bus had made its inaugural trip between Washington, DC and Harrisonburg, Virginia on February 10, 1941. It was built by the White Motor Company of Cleveland, Ohio.(1 ) Although this new service helped fill the void of declining railroad traffic, expansion of the Highway Post Office was postponed until after the Second World War and did not really see growth until the 1950s and 1960s. Railroad traffic experienced a serious decline in those decades. Passengers preferred the convenience of highways and the speed of planes to slow, chugging trains. Without all those travelers, railroads were forced to cut back on service. Fewer passenger trains meant fewer mail trains. Railway Mail Service was faced with the challenge of getting mail to post offices along these rail lines, but without being able to use the trains to do it.

Listen to Ira Daniels, an RPO and Highway Post Office employee talk about working on the HPO buses.

Well, and of course, we ran on what they call Highway Post Offices too, I guess you’re aware of that.

Ira Daniels: I ran on several of them when I was a substitute. Now when you’re a substitute, you know, you’re a substitute to be called out anytime. A lot of times you’re notified ahead of time because the guy’s taking off, they’re regular people, taking off. And I ran on from one from Knoxville to Nashville, and Nashville to Owensboro, Kentucky, and that’s the two, they called ‘em HyPOs, Highway Post Offices, and that was an adventure. You had to maintain your balance plus work mail. Some of ‘em roads were very curvy. And, but that was an experience.

Highway Post Office buses operated much like RPO cars. Both had almost identical interiors with windows barred on the outside and screened on the inside, electric ceiling lights, and an open section at the rear for holding on average 150 mail sacks.(2 ) Work spaces were also similar, containing letter cases, letter distributing tables, and racks for mail sacks. One big difference (and an important one to the clerks) was the difference in working while standing on a moving train versus standing on a moving bus. RPO clerks proud of their ability to work without hesitation on a moving train found themselves bounced around and bruised on the new moving buses. Nevertheless, due to its many similarities to the Railway Mail Service distribution process, a number of RMS clerks were transferred to the Highway Post Office, or worked both services during the same time period.

“The only thing I didn’t like about the Highway Post Office was when the roads are real bad, you know, they have a contract driver driving that bus, and sometimes they, you know they weren’t too safe driving sometimes...” —Robert Coleman, former RPO and HPO clerk

The Highway Post Office performed its last run 33 years after its inaugural trip. The last run carried mail over the Cincinnati-Cleveland, Ohio route on June 30, 1974.(3 )