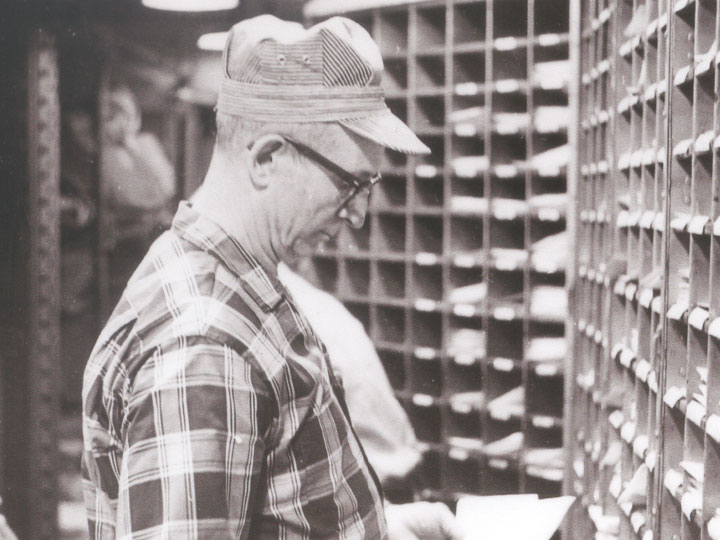 Through the 1920s and 1930s, the Railway Mail Service would realize its greatest reach and strength. Over 10,000 trains carried mail-sorting clerks across the country in 1930 alone. Stronger cars and improved tracks and communications had driven accident rates down, and consequently RPO clerk life spans up. In addition to the clerks working on board trains, RMS personnel were working mail at railway terminal stations in several cities.

While postal officials would have eagerly kept mail-filled trains running service to as many towns as possible, this was not to be the case in the mid 20th century. In the mid 1930s, at the height of Railway Mail’s success, railway passenger service began a long, steady decline that would ultimately prove fatal to the RMS. Mail fees alone could not sustain railway lines, and as passenger need declined, railway line service declined with them.

The Railway Mail Service began its decline in the 1930s, but was by no means irrelevant through the mid 20th century. RPO clerks worked to sort mail through the Great Depression, at a time when mail remained the primary communication method for most Americans. While many joined the military, many other RPO clerks stayed and worked through America’s involvement in the Second World War (1941-1945), when moving mail accurately and quickly was critical not only to the war effort, but peace of mind of families and loved ones at war. And, as is clear from numerous oral interviews conducted with clerks, the RMS became a job of choice for many servicemen returning from the war.

But nothing could maintain the Railway Mail Service at its pre-WWII levels when passengers continued to choose automobiles or airplanes over trains. Postal officials used highway buses to replace some disappearing train route lines, but even those did not last very long in comparison. Airmail gradually became the preferred mode of mail transit for postal officials. By 1975, the Postal Service was placing so much mail aboard airplanes on a regular basis that the separate “air mail” first class postage charge was discontinued. While American airlines continue to carry America’s (and international) mail, postal officials continue to transfer more mail onto trucks where costs make the carriage of mail by highway less expensive.

As the skies were opening up for travelers and mail, so the country was discovering a love for longer and longer automobile trips. Just as the greatest success of Airmail Service came with the adaption of aircraft that could carry larger and larger cargos, the mid 20th century focus on establishing an interstate highway system would bring short and long haul trucks to the attention of postal officials as effective mail carriers. In the early 1900s a cross-country trip would have taken approximately two months. With the establishment of a national highway system, this was cut down to two weeks. President Eisenhower signed the Federal Highway Bill on June 29, 1956, which authorized the construction of an interstate highway system.(1) All Americans found themselves affected by Eisenhower’s new bill; either directly as motorists, or indirectly through the movement of mail and consumer goods.(2)

‹ Race Relations up World War II ›
Back to Top