The turn of the 20th century brought more changes for the Railway Mail Service. The railway post office clerk’s life was considered “one filled with risks,” as acknowledged by the Second Assistant Postmaster General.(1) Clerks frequently encountered train wrecks, falls, derailments, fires, and robberies. One of the more prominent safety hazards were the wooden cars. A simple spark could ignite a blazing fire. The wooden framed cars provided no protection against flames, adding and, in the fact were little more than kindling as they were filled with bags of mail.

On January 1, 1913, the Parcel Post Act was ratified. It offered a new way to send large objects through the mail. Within its first five days of activity, four million packages were handled by 1,594 post offices nationwide. Eventually, strict regulations had to be set up to restrict what could or could not be sent after people attempted to transport unconventional packages. One couple in 1914 could not afford the train fair for their four-year old daughter to visit her grandparents, so they tacked the grandparents’ address on the child and sent her by way of the Railway Post Office for the cheaper rate of 53-cents.

Mr. Bresland, of Springfield, Vermont, worked with the Railway Mail Service from 1950 until 1957. He ran on the St. Albans and Boston line. In addition, Mr. Bresland worked in the Highway Post Office Service, running from Burlington to Albany and Newport to Springfield.

Donald Bresland: In Westminster, Vermont on the trains we used to pick up chickens, baby chicks, they used to come over from Hubbard Farms in Walpole, New Hampshire, they’d put ‘em on and all the time from the time the chicks were put on till the time you get off the train that’s all you could hear was the little chicks chirping all the time, there. A whole bunch of boxes making a heck of a lot of noise, there.

Mr. Liszewski, of Dubois, Illinois, started his Railway Mail Service career as a sub on the Chicago and Memphis line. He eventually became a regular on the Carbondale and Chicago line. Mr. Liszewski retired from the RMS in 1967.

John Liszewski: Well, yeah, back then, I was a register clerk, too, and had the payroll for Chanute Air Force Base, which was all cash, later on I found out it was 60,000 dollars or 600,000 dollars... when the train stopped there they had police all over the place and military police, and everything, and they signed for them, you know, the registered mail, and that was about the biggest deal I ever had. So, it was the payroll for the whole Air Force base.

Items deemed “nonmailable” included, but were not limited to, “matter manifestly obscene, lewd or lascivious; articles intended for preventing conception or for procuring abortion; articles intended for indecent or immoral purposes,”(2) “Spirituous, vinous, malted, fermented, or other intoxicating liquors of any kind; poisons of any kind, and articles and compositions containing poisons,”(3) and “live or dead (and not stuffed) animals, birds, or poultry.(4)” This addition of more flammable materials increased the risk of fires and explosions along lines.

“I had a little square box one time that said “human remains” on it…” —Gerald Lange, former RPO clerk

Wooden Railway Post Office cars were made more dangerous by the practice of using gas or oil to illuminate and heat the car. By 1896, 215 of the post offices used gas, while only 13 used electricity. Of those cars, 42 percent used steam to provide heat, and 27 percent employed gas.(5) Steel gradually replace some wood cars, but railroads continued to prefer the more inexpensive wood to fireproof materials for RPO car construction.

The late 1800s were the deadliest decades for the Railway Mail Service. Clerks faced risks every day spent on the job. This provided little comfort or compensation for worried families at home. The “Brotherhood of Railway Mail Clerks” organized in 1886 to fight for better wages and safer working conditions. By 1898, a beneficial department was added to the “Brotherhood,” paying “$4000 for accidental death and $18 weekly for disability.”(6) In 1904, it was renamed the Railway Mail Association, until 1949 when it was renamed the National Postal Transportation Association(7)in recognition of the service’s title change that same year.

When the Railway Mail Service and U.S. government met the demands of railway postal clerks, it was usually in answer to issues from the service’s white employees. African Americans faced greater hardships and unable to join the “white union,” had no spokesperson to fight for their rights as well. That began to change in 1913 with the formation of the National Alliance of Postal Employees in 1913. [Learn more: Race Relations]

Mr. Freeman worked for the Railway Mail Service starting in 1949 as a substitute clerk on the New York and Washington run. In addition, he worked at the Pennsylvania Terminal for a large portion of his career, and also made runs with the Highway Post Offices.

INTERVIEWER: As a sub, did you carry a gun? I know the rest of the guys carried a .38.

Robert Freeman: Yes, yes I did. I carried an LA key, carried a .38, which we never knew whether to fire it. I went out on the range a couple of times with it, but the bullet I think traveled maybe 10 or 15 feet. It just dropped down in front of me. The ammunition was green, it was moldy and green, so it wasn’t the most handy thing you’d want to defend yourself with, I can tell you that.

Joseph Kitts: We carried a lot of money with Bureau of Engraving to the Federal Reserve and we all, everyone of us had a pistol, everyone one of us had a gun, so anyway. Then there was one time I had a hand to hand register, to be a hand to hand register that register had to be over a million dollars and President Eisenhower was coming into Washington. They stopped me out in the railroad yard with that gun and all that on and they wouldn’t let me go into the post office there, where the museum’s at today. Anyway, I can understand that, so. That was a lot of years ago, so anyway.

During America’s involvement in the First World War (1917-1918), Railway Mail Service clerks were exempted from the draft, administrative and military officials considering the processing of America’s armed forces’ mail to be of critical importance.(8)

“Every guy in the mail train carried a gun, a revolver ... but everybody had a revolver and you carried your revolver when you were in the mail train. And you’d take it with you and go up to, we had clubs where we stayed at in New York and Chicago, and you’d take your gun there, and you’d kinda keep it, sleep under your pillow [laughs]. You’d be sleeping during the day, so.” —Donald Miller, former RPO clerk 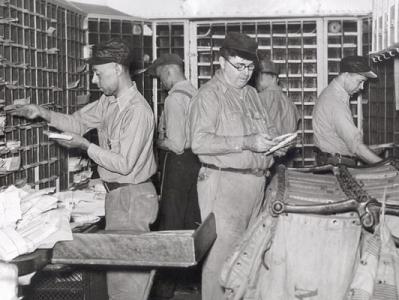