On December 21, 1926, Sharpnack was flying a mail airplane out of Elko, Nevada, with the west-bound mail at 10:51 a.m. In his forced landing report, Sharpnack noted that the "weather was very stormy with high head winds. Necessary to follow rail road and dodge around to miss storms. Took me till 2:20 p.m. to reach a point opposite Hazen, Nevada, where I landed account of insufficient Gasoline left to reach Reno Field. Landed at this point at 2:20 p.m. and caught a ride by auto to Hazen, where I secured gasoline and a Ford Truck to take myself and gas back to ship. Refueled ship and left point of forced landing at 4:05 p.m., arriving Reno Field at 4:40 p.m. Mail was trained from Reno west to destination account of weather over mountains." 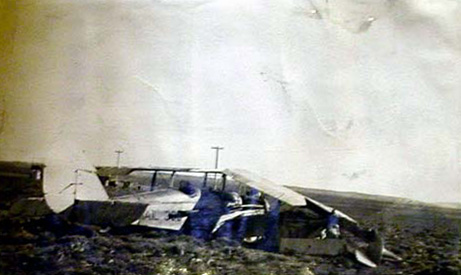 This photograph of the wreckage of a crash Sharpnack survived was one of a set from that crash that were placed in his personnel file.
- Courtesy of the National Archives and Records Administration