Airmail pilot Dean Smith is best known for a telegram he forwarded to Air Mail Service officials after a forced landing on May 15, 1923. "Dead sticked. Flying low. Only place to land on cow. Killed cow. Wrecked airplane. Scared me."

Smith had been forced to land halfway between Millersburg and Guernsey, Iowa because of a stripped crankshaft. The cow, belonging to Mr. H.A. Sheda of Victor, Iowa, was appraised at $75, which was paid to the owner in full by the department.

Dean Smith was born on September 27, 1899 in Cove, Oregon. He had 900 hours of flying time under his belt when he joined the Air Mail Service in 1920. The early airmail pilots could be showoffs, drinkers, smokers, jokesters and juvenile. A dispute between Smith and another pilot made it all the way up to D. B. Colyer, Superintendent of the Central Division. After being transferred out of one division, Smith apparently received gloves that belonged to fellow pilot.

"Referring to correspondence had in regard to my gloves, I cannot see why Dean Smith takes that attitude, -- there is absolutely no fair reason for it. These gloves belong to me personally, and are quite valuable, and I need them urgently. They were taken from my locker while I was on leave, without my permission, by clerk at this office, on whom the result of some of Smith's carelessness fell, -- that of gathering up his belongings after he had left this station. If he would pay more attention to keeping his equipment together this sort of thing would not happen.

I have nothing to do with his gloves, or whatever it is he has lost, nor have I any idea where they are or what has become of them. Therefore, I make the request that my gloves be sent me without further useless and ridiculous correspondence.

I would thank you to convey the above to Pilot Dean Smith, and would appreciate whatever you do to expedite return of the cause of all this baby-like controversy."

On December 11, 1924, Colyer wrote to Smith, asking him to give the gloves back. "My dear Dean," his letter began, "Pilot Johnson advises that you have in your possession a pair of gloves belonging to him. If such is the case I suggest that you return them to him. You do not care to retain in your possession the property of another when the second party desires its return do you.

"As near as I can learn Pilot Johnson is in no [way] responsible for the loss of your mittens. I think the right thing to do is to return his property and request the Manager at Hazelhurst to forward yours. If I can be of any assistance in this matter please advise." 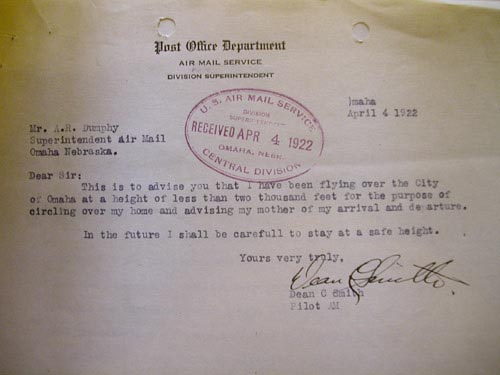 When Dean Smith was reprimanded for flying too low over the city of Omaha, he responded with an explanation in this telegram. He told his supervisors that he was merely letting his mom know where he was.