The Moon and the Postage Stamp 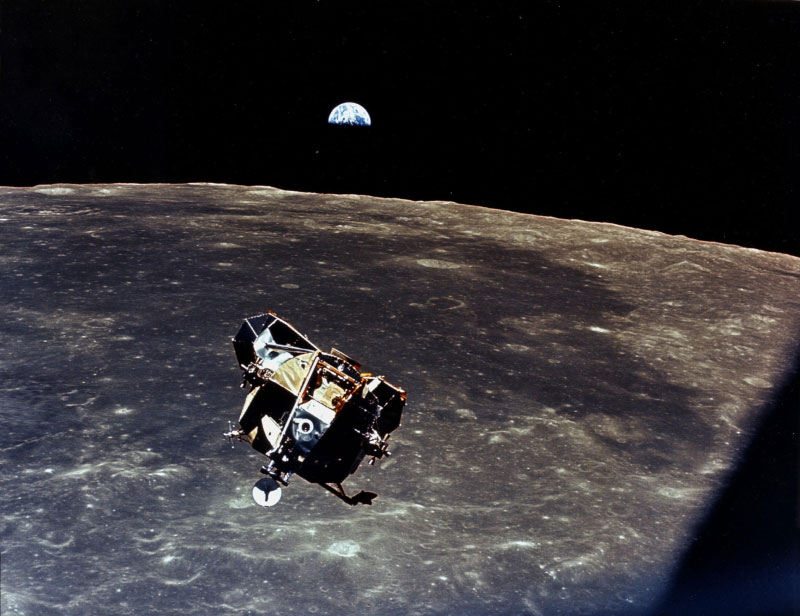 This month we celebrated the 50th anniversary of humankind’s first steps on the Moon. A half century is an interesting vantage from which many can recall the event and can begin to appreciate the significance of the mission in relation to other milestones. In the NASA history, Chariots for Apollo[i], the final words are reserved for historian Arthur Schlesinger who wrote: The 20th Century will be remembered, when all else is forgotten, as the century when man burst his terrestrial bonds[ii].

The Moon landing was a confluence of mythical aspiration, scientific curiosity, and nationalistic competition. Our country embarked on a magical journey towards the stars, requiring two percent of the nation’s workforce and four percent of the budget for a decade. It is hard to say which was more impressive, the technological achievement or the political will. As Tom Hanks said in the movie, Apollo 13, “It wasn’t a miracle, we just decided to go.” [iii]

The Space Age is generally viewed as a space race between the US and USSR. This is not how it began. As part of the International Geophysical Year (IGY), Sputnik was part of a comprehensive series of global geophysical activities to span the period July 1957-December 1958. Scientists from 67 nations around the world took part in a series of coordinated observations of various geophysical phenomena. The United States also expressed an intent to orbit an artificial satellite but encountered numerous setbacks.

When President Kennedy, faced with Gagarin’s successful orbital flight and political pressures at home, challenged the nation to land a man on the Moon it became a challenge to the Soviets as well. Considering the open nature of the American program, the Russians knew exactly when they required the next space spectacular. These would include: first probes to the Moon and Mars, first multi-craft mission, first woman and first Extravehicular activity (EVA). While Sputnik was serious science, the national prestige and political value associated with subsequent Soviet space activities was not lost on the Kremlin or the White House.

Soviet firsts were not without consequences. To beat the Americans to orbit, the Russians locked the flight controls and required that Gagarin parachute prior to landing as the capsule had not yet been rated for a safe landing. When Valentina Tereshkova was chosen to be the first woman in space, her primary qualification was that she was parachute-rated. Leonov accomplished the first spacewalk but his suit required partial deflation in order to get back into the spacecraft. When the Soviets sent up the first three-man crew, the confines were so restricted there was no room to wear spacesuits.

The United States, in contrast, had a more measured program building on earlier capabilities. While NASA progressed from Redstone to Atlas, Titan to Apollo, and from the Apollo 1B to the Saturn 5, the Russians continued to use the R-7 first used in 1957. Despite flights cut short like Glenn’s orbital flight (when there was concern the heat shield was loose) and the docking mission of Gemini 8 (when a stuck thruster resulted in an out of control spacecraft), America continued to enjoy success. This came to a halt when the first Apollo crew died during a launch pad test. Gus Grissom, who had nearly drowned on his Mercury flight, had previously said, “"If we die, we want people to accept it. We're in a risky business, and we hope that if anything happens to us it will not delay the program. The conquest of space is worth the risk of life."[iv]

The fire that killed the Apollo 1 crew forced NASA and its contractors to reexamine both hardware and procedures. Eighteen months later Apollo was back on track and by the spring of 1969 it looked like Apollo 11 would have the first opportunity to do the landing. The March checkout flight of a Lunar Module in Earth orbit went well and the May dress rehearsal was equally successful. NASA leadership told Armstrong if he needed to abort the landing, he would get another mission to try again. 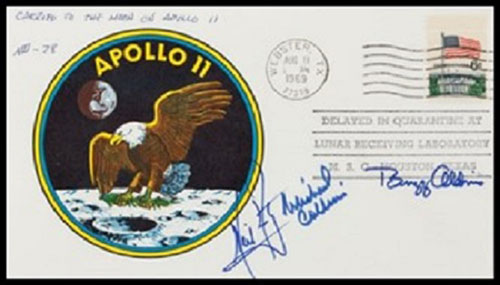 Stamp collectors will be pleased to know that philately played a prominent role during the Apollo 11 mission. Beginning with Apollo 11, crews autographed philatelic envelopes cancelled on the launch date and left them with family. In the unlikely event of tragedy, families could sell the “Insurance” covers and pay off the mortgage or put kids through college.[i] In addition to these, 214 crew signed envelopes were carried as personal mementos in their Personal Preference Kit (PPK). Over the years, Buzz Aldrin has gradually released his share into the auction market. The average hammer price has been around $25-30,000. With the passing of the mission Commander, the first Armstrong FLOWN cover sold for an astounding $156,000 during this past year.

With a nod to Operation HUSH HUSH, in which the Bureau of Engraving and Printing (BEP) secretly produced the Project Mercury stamp, the Post Office Department (POD), in concert with BEP and NASA, concocted a plan for a First Man on the Moon stamp.

Beginning in April, meetings between the Post Office and BEP centered on how to honor the space program’s seminal achievement. Paul Calle, a Connecticut artist and original member of the NASA Art Program in 1962, had been sketching ideas for a stamp. After a little guidance, Calle refined his submissions to focus on the astronaut’s first step.  The design would be approved by Postmaster General Blount on May 13th. To make the stamp stand out the PMG decreed that the issue would be 50 percent larger than traditional commemoratives. 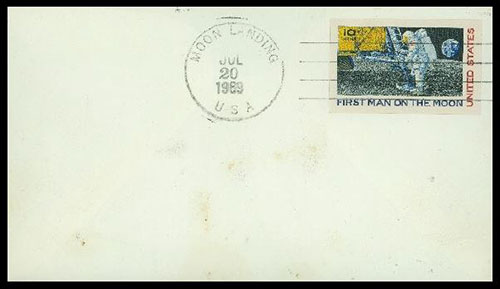 NASA suggested a printing plate be carried to the lunar surface but at 33 lbs., the plate was nixed for a small Master Die weighing less than a pound. Even so, NASA convinced BEP to permit the die to be trimmed from 15 to 4.5 ounces.  A request from the Postmaster that the crew cancel an envelope during their stay was summarily vetoed by the space agency. Lunar surface time was too precious to spend time playing postal clerk. On the return trip, however, the envelope with a proof example of the new stamp was postmarked as requested and is now known as the Moon Cover.Beginning in April, meetings between the Post Office and BEP centered on how to honor the space program’s seminal achievement. Paul Calle, a Connecticut artist and original member of the NASA Art Program in 1962, had been sketching ideas for a stamp. After a little guidance, Calle refined his submissions to focus on the astronaut’s first step.  The design would be approved by Postmaster General Blount on May 13th. To make the stamp stand out, the PMG decreed that the issue would be 50 percent larger than traditional commemoratives.

Because Blount insisted that all stamps be produced from the die carried to the lunar surface, plans to issue the stamp on July 20th had to be scrapped. Printing of the stamps started prior to the return of the master die to BEP, as four offset colors were required. Beginning August 20th, the engraved portions of the stamp were added. First Day of Issue ceremonies were held on September 9th and resulted in nearly nine million first day covers. The Post Office would eventually print 216,371,712 copies of the stamp.[vi]

The Apollo 11 mission and the First Man on the Moon stamp were special. Like Lindbergh’s solo crossing of the Atlantic by air 42 years before, the achievement of landing humans on the surface of the Moon was viewed as a global one and not of one person or one country. The event was inspired, heroic, and a technological triumph, but it also brought the world together.

The stamp remains singularly important as well. In the form of the stamp’s master die, it was the first art to reach the surface of another celestial body. When that master die returned, it made a real impression on the 216 million copies distributed in America and around the world.

Special guest author David S. Ball is a retired Air Force officer. His book, American Astrophilately: The First 50 Years, was nominated for a national book award in 2010. He serves as the US Delegate to Fédération Internationale de Philatélie (FIP) for Astrophilately, is President of the American Air Mail Society, and is a member of the Royal Philatelic Society of London, American Philatelic Society, American Association of Polar Philatelists, Society of Israel Philatelists and the American Association of Philatelic Exhibitors. He is a nationally accredited philatelic judge and serves on the expertising committee of the American Philatelic Society. He is President of the New England Federation of Stamp Clubs and is the former Executive Director of the Spellman Museum of Stamps and Postal History in Weston, MA.