As Public Programs intern Emily Shapero reaches the end of her internship at the Postal Museum, she reflected on the Pony Express Festival she developed as her project this summer.

On Saturday, April 3rd, the Smithsonian National Postal Museum celebrated the 150th Anniversary of the Pony Express with a fun-filled family festival. 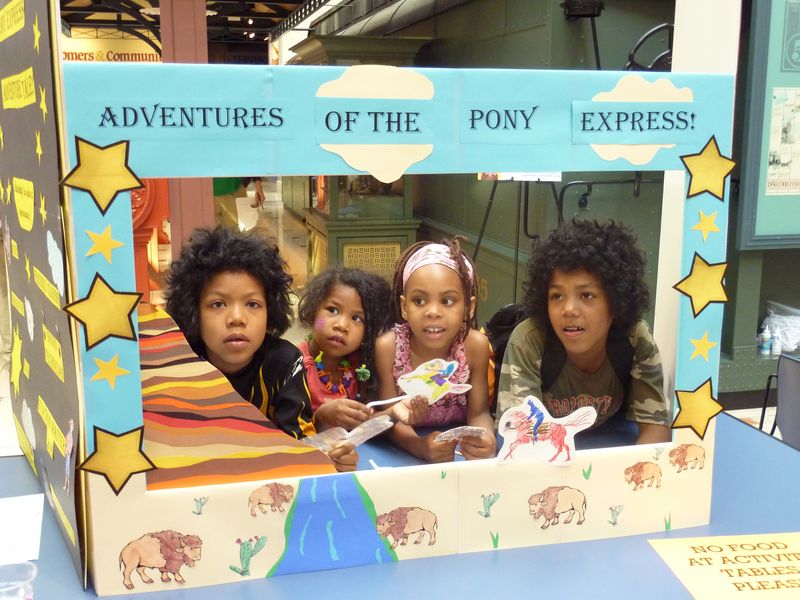 As the museum’s very first all-day program, the Pony Express Family Festival featured ten different educational activities. Over 400 visitors to the museum starred in their own interactive puppet show, designed celebrity footwear for Buffalo Bill, sorted a pile of 1860’s mail, and added lines to our Pony Express Twisted Tales storyboard, all while learning about the romance versus reality of the Pony Express.

Thanks to our wonderful volunteers, these activities were exciting and educational for visitors of all ages. Over 20 volunteers, including a few dedicated NPM staff members, knotted on their red bandannas and got into the western spirit. Visitors noted the volunteers’ enthusiasm and friendliness in their responses on the program evaluations. We would like to say a very special “thank you” to all of our volunteers; we couldn’t do it without you!

The high attendance and positive feedback from the Pony Express Family Festival are some of the most flattering compliments that the National Postal Museum Education Department can get. We are so happy reach out to both the greater DC Metro area and our out-of-town tourist audience here at the museum and hope to keep our visitors coming back for more exciting public programs in the future! 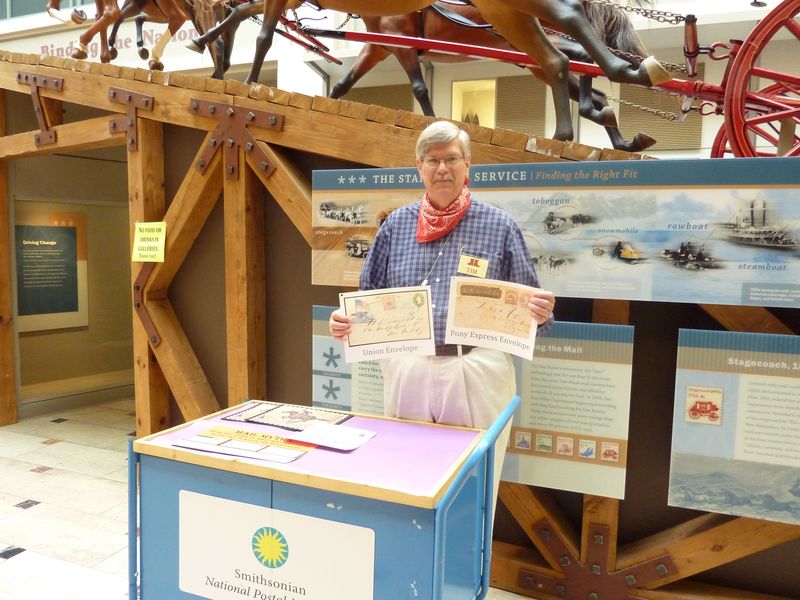 Now take a look at the “twisted tale” written by our visitors on April 3rd! As each kid added a new line to the story, the tale quickly spun out of control—an example designed to illustrate how our memories of the Pony Express are often more fact than fiction. To spice up the story, families were encouraged to use slang words popularized by western comic books and dime novels. 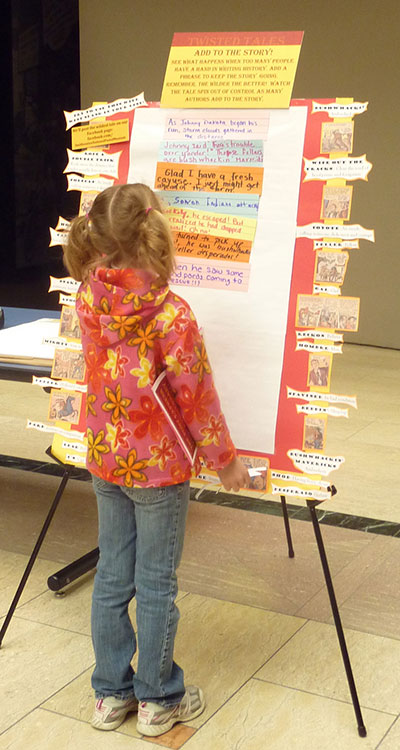 A museum visitor checks out the Twisted Tale in progress

As Johnny Dakota began his run, storm clouds gathered in the distance. Johnny said, “There’s trouble over yonder! Those fellers are bushwhackin’ mavericks! Glad I have a fresh Cayuse. I might just make it ahead of the storm.”

Luckily, he escaped! But he realized he had dropped the mail! Oh no! As he turned to pick up the mail, he was bushwhacked by three yeller desperadoes! But then he saw some gals and pards coming to the rescue!!! They were on their horses when suddenly they were bushwhacked by a mighty amount of desperadoes…and a stampede of buffaloes came! Johnny said, “I reckon I’ll get away from these buffaloes,” and he rode a double trick. Johnny reckoned he could outsmart these coyotes

Johnny, being a good feller, didn’t suspect the riders ahead were bushwhackin’ mavericks. “These snacks wiped out the tracks and hid behind the boulders yonder to hold up the stage,” Johnny thought as he tracked the men. Then, the snakes whacked Johnny! Johnny was Spavined!

Johnny sped up his Cayuse to get out of his tough jam. He quickly made it to the next station, but Johnny realized his horse was injured.

A doctor came. “Can you help me?” Johnny asked. “Bu t I love him!” he exclaimed. “Yeah right,” responded the doctor.

Johnny eventually got on his way. “I would have made it here sooner if I hadn’t been bushwhacked. Shucks! The delivery is late by 2 days! Don’t worry, we’ll get it there! I like D.C!”

But the Pony Express never went to DC! So Johnny kept galloping along with the mail until…a robber and a thief shot him! So he ducked! And so he shot back! He went to the hospital. He got medicine.

Johnny got back in his horse and he rode a double trick until he met a feller Pony Express rider. And then he fell off his horse! He got back on and started riding, but the wind blew dust in his eyes so he couldn’t see. The robber and the thief were following him and they shot but missed. So Johnny wiped out the tracks so the riders couldn’t follow him.

Then he reckoned he’d get some beddin’, so he checked into an inn. When he got into bed he jumped out of bed because there was a scorpion! But he jumped a little too hard, broke his foot, and ended up back at the hospital.

“Snake!” said Johnny. He looked down to see two young lads fighting over a letter. The rider glared at him. He blew his whistled and threatened to call the mail cops!

Then, Johnny met a gal mail girl who refused to date him unless he got the mail delivered on time. She looked like Beyonce, so Johnny finally delivered the mail. The horse scooped him off.