Our annual Train Day Celebration is this Saturday, May 11th from 10 a.m. – 4 p.m. This year is extra special, as it marks 150 years since the railroad was completed. But why does the National Postal Museum celebrate the start of the Transcontinental Railroad? Learn more about the history of the cross-country railroad and its relationship with the Post Office Department.

150 years ago, officials in Promontory Summit, northern Utah territory, drove a “golden spike” into the tracks in celebration of the connection of the Transcontinental Railroad, opening up the country to moving people and mail faster and easier than ever. The lines connected the Central Pacific and Union Pacific railroads on May 10, 1869. Of course, the connection was not as seamless and perfect as a cursory view of history might imagine. For instance, passengers and cargo had to get off the trains and cross the Missouri River by boat between Council Bluffs, IA and Omaha, NE until 1872 when the Union Pacific’s bridge was finally completed.

The U.S. Postal Service will commemorate the 150th Anniversary of the completion of the Transcontinental Railroad with three distinctly designed Forever stamps first issued on May 10, 2019. © USPS; all rights reserved.

As the fulfillment of a dream—physically uniting the nation coast to coast—the Transcontinental Railroad was a hit. It was something the Post Office Department had been waiting, somewhat impatiently, to be completed. On October 1, 1868, the Post Office contracted with Wells, Fargo & Company to carry mail between “the western terminus of the Union Pacific railroad and the eastern terminus of the Central Pacific, for the term of one year from October 1, 1868, or until the two railroads should meet.” When officials made that contract, they assumed the junction could not be met before the end of July due to severe winter weather. However, the winter was unusually mild and the two railroads met in May, saving the Department tens of thousands of dollars. The Post Office immediately contracted with both the Union and Central Pacific once the two lines met for carrying the mail every day of the week. Thirty clerks were put to work on the new mail cars over the route. 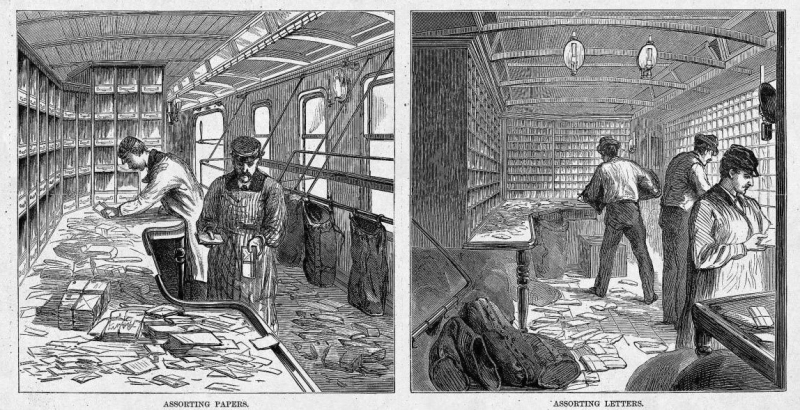 Clerks working in a Railway Mail car from Harper’s, 1875. Clerks were expected to speedily process the mail as the trains speed along the tracks.

The Department eagerly expanded the Railway Mail Service to lines connecting to the north and south of the Transcontinental Railroad, extending the mail cars’ reach as fast as they could. For those living along the new rail lines, the difference in mail delivery was stunning. Instead of waiting weeks, even months for letters from the eastern seaboard (as they made their way slowly through connecting stage lines across the Trans Mississippi West), letters, newspapers, magazines, and other communication links with the outside world were suddenly in their hands only days after being put in the mail.

The National Postal Museum has long celebrated the history of the nation’s Railway Mail Service and the workers who kept it in operation. You can start with an introduction to the service and its operations here. Don’t forget to listen to stories of some of the dozens of former Railway Post Office clerks who shared their stories here. A number of clerks sat down with our staff to tell their stories on video, and those can be found here (just look for “Railway clerks” in the search box).

On Friday, May 10th - the official anniversary of the railroad's completion - use the hashtag #Transcontinental150 to follow a social media day hosted by the Smithsonian Institution exploring the history and legacy of the Transcontinental Railroad. Museums and cultural institutions across the country will share objects and stories tied to trains—but also relating to immigration, displacement, labor history, food history, music history, postal history, and much more.