Having worked at the National Postal Museum before it even opened in 1993, Registrar Ted Wilson is replete with knowledge and stories about the museum and its objects. In anticipation of the upcoming exhibit of musician John Lennon’s childhood stamp album, Ted describes how this extraordinary item became part of the museum’s collection. “John Lennon: The Green Album” opens on September 7th, 2018, at the National Postal Museum, the same day USPS releases the new John Lennon commemorative postage stamp.

In June 2005, Wilson Hulme and I were scheduled to go to London for an exhibition at the Royal Philatelic Society and a meeting at the British Library. Wilson was the National Postal Museum’s Curator of Philately and had set the museum on a path of ‘accessing the inaccessible’ – locating rare philatelic material previously unavailable to the public and borrowing it for blockbuster exhibitions. The two best known examples were the Benjamin K. Miller stamp collection and the Royal Philatelic Collection.

A few days before our scheduled departure, an article appeared in Linn’s Stamp News. John Lennon’s childhood stamp album had been acquired by Stanley Gibbons, the London stamp dealer and publisher. Wilson wanted to know if I had ever heard of the album. I had not. I had seen the stamp album that belonged to Freddy Mercury of Queen (now in the collection of The Postal Museum in London). But John Lennon’s stamp album seemed almost too good to be true. What were the odds that a previously unknown stamp album purportedly belonging to John Lennon would appear in London three days before we were to visit the Royal?

Wilson Hulme loved the idea of John Lennon being a stamp collector. Wilson had grown up in an era when stamp collecting was much more mainstream. He had collected Liberian stamps as a child and, like most philatelists, returned to stamps later in life, becoming a serious collector and passionate researcher. He recognized that young people today had too many competing interests and little, if any, contact with stamps. This is what made the Lennon stamp album so intriguing. As Wilson put it, “There are people who think stamp collecting isn’t cool and maybe this will cause them to think twice about that. It just doesn’t get cooler than John Lennon.”

The exhibition at the Royal and the meeting with David Beech at the British Library were both very successful, but what I remember most about the trip was the time spent with Wilson. Before coming to the museum, Wilson had been Vice President of Operations for Nabisco and had traveled extensively. Although this was a relatively short trip, Wilson insisted on showing me a few of his favorite parts of London and, in particular, the City. The Gherkin had recently opened and he also wanted me to see Lloyd’s, a building literally turned inside out. Those parts of London became my favorites, too.But how could we be sure it was genuine? According to the Linn’s article, the stamp album was purchased from an American collector, but a phone call to Stanley Gibbons provided little additional information. Even so, we scheduled an appointment to see the album on June 13, 2005, and asked the museum’s Finance Director, if it would be possible to arrange an electronic transfer of funds…just in case.

On June 13, we took a cab to Stanley Gibbons. The Lennon stamp album was being sold by the autograph division of the company. We were ushered into the back, where tables were set up. Staff brought out a small box and an envelope which held a reproduction of an early photograph of John Lennon. The photo was nothing special but the stamp album inside the box was utterly charming.

The circa 1950 green Mercury hardbound album looked more like a book than a stamp album. Inside, on the flyleaf, were four Lennon signatures. Two were in pencil and appeared to be practice signatures. The other two were in blue pen and one was above an address written by the same hand - 251 Menlove Ave, Woolton, Liverpool. This was the address where Lennon lived with his Aunt Mary, known as “Mimi,” after his parents separated. The flyleaf also included a running tally of the stamps: 500, 565, 615, 657 and 800, written in both pencil and pen. A second - and barely legible - name and address at the top of the flyleaf had been partially erased.

The album’s title page includes stamp collecting trivia and publisher information. This was the sixth edition of the Mercury Stamp album published by Stanly Gibbons. The page includes a ‘war-time postal address of retail departments’ in addition to the more famous Strand address. The most interesting part of the title page were the hand drawn doodles. Beards and mustaches had been drawn over the images of Queen Victoria and George VI. Were the signatures and doodles from the pen of a young John Lennon?

We looked at the contents of the album. Of the album’s 144 pages, 53 are devoted to the UK and the Commonwealth. According to Gibbons, the album contained about 550 stamps. Most were used and none rare. Hinge fragments remained where other stamps had fallen out. Some sections had few or no stamps. For whatever reason, the New Zealand section had more stamps than almost any other section.

We tried to get additional information about the album but the previous owner had insisted on remaining anonymous. The stamp album was a great find if it was genuine, but how could we know? We decided we would purchase the album only if we could have an additional 60 days to research it, with the understanding we could return the album if we determined it was not genuine. How we would be able to do that was anybody’s guess. During this period, neither party would discuss who had purchased the album.

This is how John Lennon’s childhood stamp album ended up at the National Postal Museum. At the museum, we carefully examined the partially erased name and address on the flyleaf. The name appeared to be [Char?]les Stanley Parkes, who was John Lennon’s cousin. Allison Galloway, our Public Affairs Specialist, knew someone who specialized in Beatles memorabilia. Through this gentleman’s contacts, we were able to track down a collector who had the email address for Stanley Parkes. An email was sent stating that we had recently found a stamp album with his and John’s names and addresses on the flyleaf.

Here is the email we received from Stanley Parkes on June 22, 2005:

Quite extraordinary that you should contact me about John’s Stamp Album. 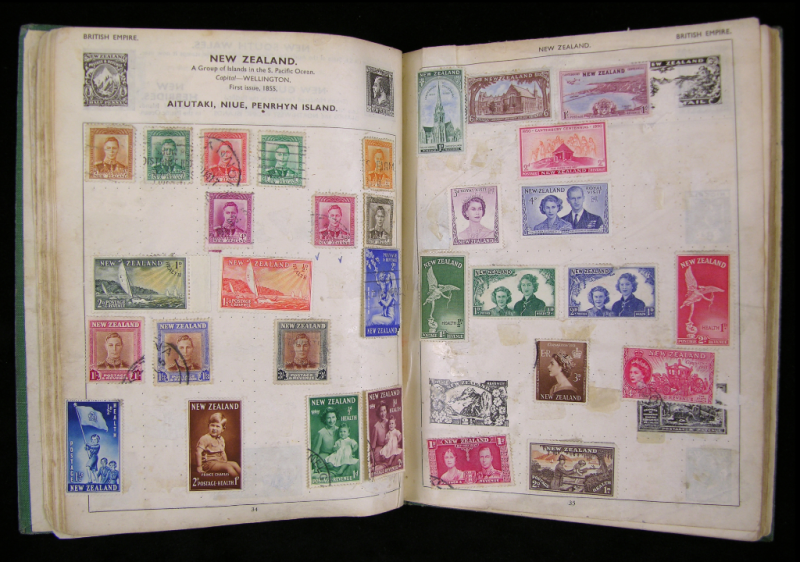 The New Zealand stamps Lennon obtained through correspondence with relatives.

John and I grew up together and were very, very close to one another in fact he was just like a little Brother to me. In fact, I passed on to him such things as my 300 Dinky Toy Cars, and my Mecanno Sets which were made by the very Famous Liverpool Toy Manufacturing Company and Mecanno Set Makers. Their Products are all on show at a Liverpool Museum on the Albert Docks, where the Beatles City Cavern have their Tourist Attraction about the Beatles, Etc. When I read recently that his Stamp Album had gone for some amazing price to some collector, I thought to myself “I bet that is my Stamp Album that I gave to John,” for at the time it was not reported that my name was on the front cover of it.

I got him interested in Stamp collecting and he would carry on collecting stamps himself after I gave him my Stamp Album. Especially as Aunt Mimi corresponded with our large amount of relatives in New Zealand. Stamp collecting was very good for improving one’s Geography Lessons at School.

He did inherit the Stamp Album from me and I encouraged him to keep an interest in it. How did it come to end up in an American Museum, was it a Private Collector?

From there, we were able to get his phone and gather additional information about the stamp album. We wouldn’t have to return it after all. Two days later, we issued a press release announcing the acquisition. The September 2005 issue of the Smithsonian magazine featured an article about the stamp album. This all led to an exhibition, John Lennon: The Lost Album, which opened on October 6, 2005. We invited Stanley Parkes to the opening and he gave a wonderful informal talk about John’s early life and their common interest in stamp collecting. It was his first and only visit to the United States. On Sunday, October 9, 2005, the museum held an open house to mark the 65th anniversary of John Lennon’s birth. Beatlemania Now, a Beatles tribute band performed during the event, which drew more than 5,000 visitors.

Since then, John Lennon’s childhood stamp album has been featured in numerous exhibits both here and abroad:

Stampex, London, September 14-17, 2016. (Displayed for the first time with Freddy Mercury’s childhood stamp album, from the collection of The Postal Museum in London.)

The John Lennon childhood stamp album was a significant acquisition for the museum. It was intended to show visitors that famous people, including those you may least expect, have collected stamps. For me, though, when I see the Lennon stamp album, I also think of Wilson Hulme, who passed away unexpectedly in 2007, and Stanley Parkes, who passed away in 2016. The album would not have become a part of the national collection were it not for them.