Officially known as “Migratory Bird Hunting and Conservation Stamps,” Federal Duck Stamps are the longest running series of U. S. stamps. They are also among the largest and most beautiful of stamps, depicting all species of North American ducks, swans and geese.

Duck stamps are revenue stamps, not postage stamps. The first duck stamp was issued in 1934 and cost $1.00. The price has risen over the decades and the stamp has cost $15.00 since 1991. The stamps provide revenue for the U. S. Fish and Wildlife Service to purchase or lease land—valuable waterfowl habitat—for inclusion in the national wildlife refuge system. The Federal Duck Stamp program has protected over 5 million acres of waterfowl habitat since its beginning in 1934 and its success has spawned similar programs at the state and local level. 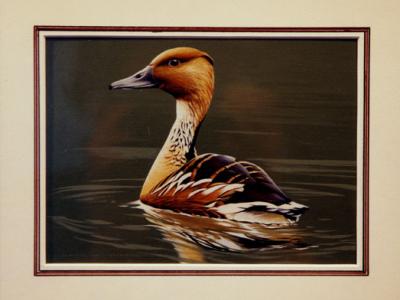 This exhibition explored the history of rare and collectible Federal Duck Stamps created as a result of this extraordinary conservation program. 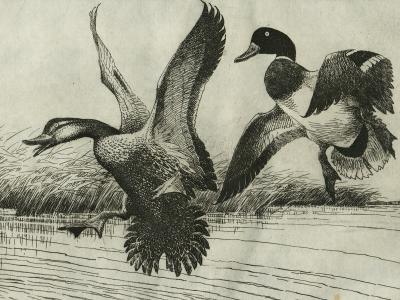 The Jeanette C. Rudy Duck Stamp Collection
The lovely, alluring duck stamps have captivated many collectors, including Jeanette Cantrell Rudy. The indomitable Mrs. Rudy, however, occupies a niche all her own. Over a fifty-year span, she assembled the hobby’s foremost collection. This exhibit features a sampling of the collection’s premier items, including the first duck stamp ever sold, errors, artist-signed issues, and remarques. 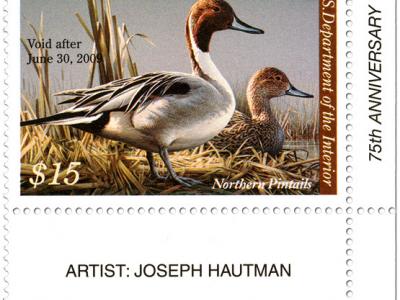 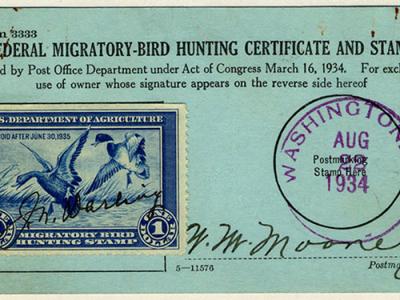 A painting of an American Wigeon duck resting in the water near some reeds graced the front page of The Washington Post's October 28th issue along with a...

Hunting Permits and Duck Stamps in the Museum's Collection

Each year since 1934 the federal government has issued a "Migratory Bird Hunting Stamp," a revenue stamp popularly referred to as a "Duck Stamp." Funds generated by the sale of the stamp are used to purchase and maintain migratory waterfowl refuges. The program has raised over 670 million dollars to date by the sale of over 120 million Federal Duck Stamps to hunters, conservationists, and stamp collectors.

Throughout the 1920s, some members of Congress lobbied for legislation to protect the nation's dwindling migratory waterfowl flocks. The Migratory Bird Conservation Act, passed in 1929, established the procedure and authority by which lands for waterfowl refuges could be purchased. The Act, however, provided no funding for the purchases. The persistence and enthusiasm of nationally known political cartoonist Jay Norwood "Ding" Darling and others finally provided a solution to the funding problem: a stamp sold annually to all hunters over the age of sixteen. The annual Federal Duck Stamp Contest, which determines the image to appear on the next stamp, has made the Federal Duck Stamp immensely popular. Since the program's inception, a variety of ducks, swans, geese, and even a hunting dog have appeared on the annual stamp. The role of Duck Stamps in conservation and the popularity of the annual Federal Duck Stamp contest have helped created a unique niche in the field of United States Philately for these revenue stamps.