Kenneth Russell Unger was born on April 19, 1898 in Newark, New Jersey. He traveled to Canada to join the Royal Flying Corps as a Lieutenant during World War I, and he received the Distinguished Flying Cross for his service in the war. The citation noted that he was "a gallant and skillful officer". On October 30, separated from his patrol owing to engine trouble, he was attacked by seven Fokkers; undaunted by the odds against him, he engaged them without hesitation, and by skilful maneuvering, he shot one down to crash. He has accounted for nine enemy aeroplanes and one kite balloon.

In 1921, Unger was criticized by his superiors for not taking all of the mail that was to have gone in his airplane with him on his May 14 trip out of Elko, Nevada. In a response letter, Unger argued that it was the right decision. "On May 14 I piloted ship 162 from Salt Lake to Elko. This ship carries two gas tanks. I arrived Elko O.K. but one wheel collapsed in taxying [sic] up the runway due to the weight of the airplane and defective spokes.

"[Pilot] Blanchfield, 158, arriving Elko from the west nosed over on landing due to the very light air, the short field, and the absence of a sustaining wind. On account of these prevailing conditions, rather than risk wrecking the ship on takeoff I decided to remove sufficient mail to insure a save get-away. The amount removed and dispatched by train was 118 pounds." Unger's explanation for the incident was judged to be reasonable, and he was not disciplined for his actions. Unger, however, had his share of run-ins with his superiors. He asked for time off to enter a speed flying contest, only to be told that airmail pilots were forbidden from entering such contests.

While serving in Salt Lake City, Unger ignored the admonishments from his superiors about operating a side business, and worked with a friend to operate a passenger flying service. On the weekend of May 9-10, 1925, ads appeared in the Salt Lake Telegram offering $2.50 for an air ride over the city and lake. The promoter listed was the "Unger Aircraft Co.," a company which consisted of Unger, a friend, and one airplane. Unfortunately, the airplane crashed during one trip, killing two young boys. 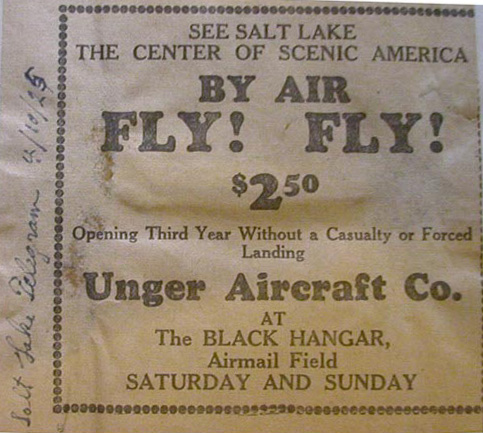 Advertisement placed by Unger seeking passengers for his side business.
- Courtesy of the National Archives and Records Administration

"I have just returned to Salt Lake from San Francisco and have had a long talk with Frank [field manager] regarding Pilot Unger's venture into the passenger flying business on May 9th and 10th. Frank informs me that he has forwarded to your office copies of the papers that carried Unger's announcement of his opening date as a passenger carrying concern. The airplanes and the pilot (Nelson) were ready Saturday May 9th, but there were no passengers that day. Sunday May 10th one trip was made about noon; two passengers, the second and fatal trip started about 12:50 p.m. Unger openly solicited business and did the mechanical work up until the accident occurred. This in defiance of the Department rulings and several conversations on this subject and in addition to all this a special letter sent to him calling his attention to the Department's ruling regarding employees entering other business.

"At no time has Unger shown a disposition or desire to conform to the Department's regulations, but instead has maintained an attitude of defiance and refusal to comply. Mr. Unger was suspended pending further understanding with your office.

"I recommend Pilot Unger's separation from the service and request your advice or approval before forwarding papers for same."

Unger was dismissed the next day.