Clifford Lawrence Webster was born in Haverhill, Massachusetts on May 14, 1891. He studied flying in 1911, then served as a civilian instructor of Navy pilots. He was an airmail pilot for only five weeks before leaving the service.

On July 19, 1919, Webster was flying from New Jersey to Bellefonte, Pennsylvania. Unfamiliar with the territory, Webster had brought a map with him, as instructed. In a telegram Webster sent to his division superintendent that afternoon, he related what happened as he was flying over New Jersey. "I found my map would not roll. Being unable to fix it in flight I took it out of the holder. While trying to replace holder the map blew out of my lap and caught on the tail wiring. On reaching Allentown I saw a good field, so landed to recover my map and find out where I was. I was on the ground 17 minutes getting off at 8:22 a.m."

Life as an airmail pilot did not agree with Webster, and by August 1919 he was flying for America Transoceanic Company, and later Curtiss Metropolitan Airplane company. 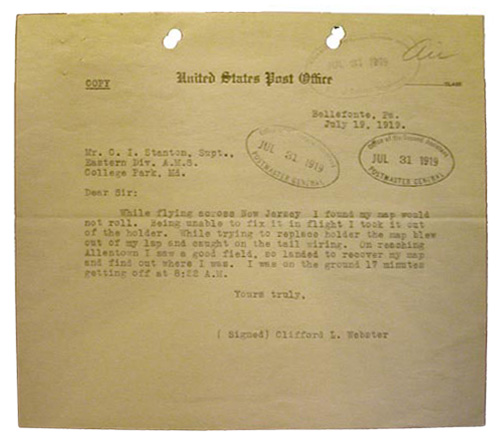 In this telegram, pilot Webster relays how difficult it was on occasion to try and open a map while flying in an open cockpit.
- Courtesy of the National Archives and Records Administration

Learn more about the maps carried by airmail pilots