William Hopson flew the mail for the Post Office Department from 1920-1927. After a brief stint out of the New Jersey fields, Hopson was assigned a permanent spot on the Omaha-Chicago route. Nicknamed “Wild Bill,” Hopson was one of the best loved and most colorful of the airmail pilots. Before flying the mail, he navigated the wilds of New York City as a cab driver, but flying was his great love.

Like most of the airmail pilots, Bill often had one eye on the mail and another on his flying time. On September 18, 1920, flying east out of Cleveland, he noticed the wind was with him more than usual and he had a chance to make a speed record. He went for it. Flying at 10,000 feet, Hopson let the wind drive him to Hazelhurst Field, the airmail field on Long Island in three hours, slicing 49 minutes off the previous record. Hopson had been asking for a transfer to the Western Division and got it the next month.

In the spring of 1921, World War I flying ace Eddie Rickenbacker was traveling to New York. Postal officials refused to lend him a plane to fly, but did permit the flying star to ride with the mail. Hopson had the honor of flying him from Omaha to Chicago and told the waiting press that Rickenbacker slept most of the trip, noting that any man who could sleep in the cockpit of a plane Hopson was flying had nerve. 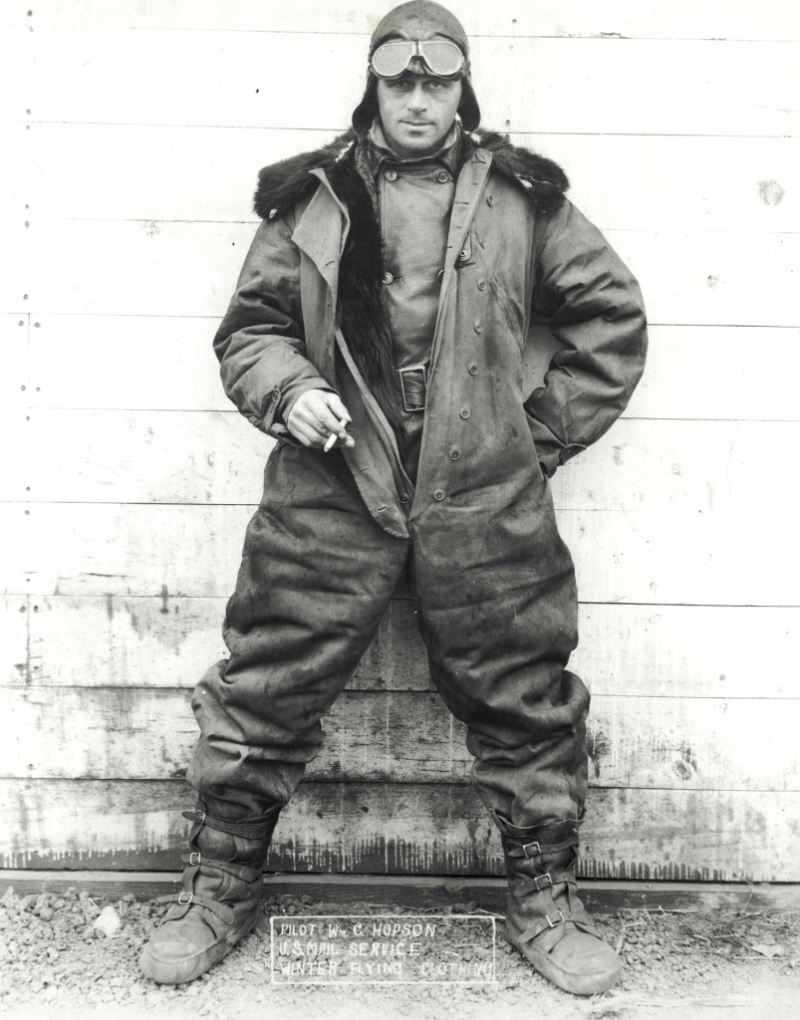 His popularity with his fellow pilots and management helped “Wild Bill” manage to get by with dozens of forced landings without the reprimands and demerits that would have faced some other pilots. In 1926 alone, Hopson made at least 13 forced landings, all of which his managers declared acceptable. Most were brief landings in which Hopson was forced to wait for better weather or to find his way in low visibility. Like most pilots of his era, Hopson was a mechanic when necessary. On November 24, 1926, while flying de Havilland #614, his top engine cowling came unfastened. Hopson landed, fixed it himself and took off again in just 20 minutes.

When the Post Office got out of the airmail business and turned its routes over to private contractors, “Wild Bill” followed. He signed on with National Air Transport, flying mail on Contract Airmail Route #17 between Cleveland and New York. Just over a year later, on October 18, 1928, the 38-year-old pilot died in a crash near Polk, PA shortly after midnight when his plane smashed nose first into the hillside, killing Hopson instantly.

About $100,000 worth of diamonds were in the mail Hopson was carrying that night. When the crash was located and his body retrieved, some of the diamonds were discovered. As word spread, souvenir hunters from around the area went hunting for wealth amidst the wreckage. Postal Inspector William Tafel was quickly dispatched to the site to retrieve the diamonds. Not knowing how to price the gems, people were selling recovered diamonds for prices far less than their actual worth. Inspector Tafel, aided by National Air Transportation staff, conducted a thorough search of the site. Some people, worried about being arrested for theft, began turning recovered diamonds into postmasters in surrounding towns. By October 25, more than $65,000 of the gems had been recovered. A number of gems were never recovered or turned in. Perhaps future adventurers might find a gem or two still on that hill.