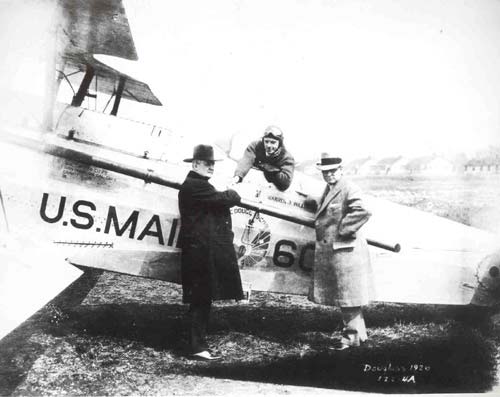 Williams in his de Havilland airplane.

On July 11, 1926, Warren D. Williams was involved in the first airplane -to- airplane collision in the Air Mail Service. Williams was flying de Havilland #422 from Cleveland, Ohio to Chicago, scheduled at the Maywood field at 8:50 a.m. While he was attempting to land, Williams collided with a small ship belonging to the Yakey Aircraft Company. The airplanes collided 30 feet in the air at the east end of the east-west runway. Williams approached the Field from the east and Yackey came in from the south. In his statement, Williams said he did not see Yackey until he was about 100 feet east of the cinder runway; he also stated that it is possible he would have seen Yakey earlier if the airmail contractor's airplane had not been parked very close to the runway.

Later that year, on December 23, Williams joined the ranks of what the flyers termed the "Caterpillar Club." Named for the insects that change into butterflies and fly away, the Caterpillar Club members were pilots who survived parachute jumps from their aircraft. Williams was flying de Havilland #622 out of Cleveland, Ohio with the west-bound mail.

On leaving Cleveland the morning of the 23rd with mail of Night New York Section, weather reports gave me 1500 ft at Bryan with 3 miles visibility. When leaving Cleveland I had approximately 2000 ft ceiling up to Woodville but soon low clouds came underneath me and I came down and tried to get beneath them but the ceiling was so low and visibility so poor that I thought it advisable to try to get thru underneath, and as the clouds were only 1000 ft thick I thought I would fly over them, thinking perhaps they only extended probably 20 or 30 miles. 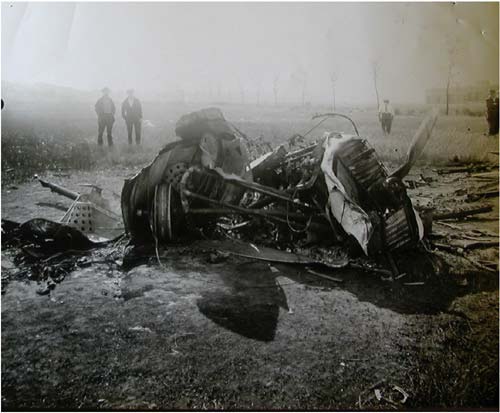 The remnant's of Williams' de Havilland airplane #622 after the crash.
- Courtesy of the National Archives and Records Administration

After flying 10 minutes the clouds began to climb upwards and I was flying thru them. I started climbing, thinking that I would get on top and after getting up about 1500 ft and still not on top of them I noticed that my air speed had slowed up considerable, which showed me that I was collecting ice. Thinking perhaps I had better turn back, I started to and while trying to make the 190° turn I noticed that my turn indicator had quit working, then I tried to complete the turn with the compass alone, but it would not hold steady. For a while it would stay in one place than it would spin around in one direction then to the other, then I noticed that I began to lose altitude and I attempted to keep as much as I had to get back east but no matter what I did the ship continued to lose altitude and after fighting it for probably ten minutes I had gotten down so low and still the ship was out of control so I thought it advisable that I at least save myself. I cut the throttle and jumped. As soon as I saw I was clear of the ship I pulled the rip cord and the chute opened up at approximately 300 ft above the ground.

The airplane and its cargo were destroyed when it crashed into the ground and was consumed by fire. Among the registered items claims were later made on that were lost were three gold match boxes, a $20 gold piece, one five-point diamond white gold ring, and a gold bracelet.