John P. Woodward's airmail service career was only three months old when he flew his de Havilland airplane #178 into a snow squall near Tie Siding, 40 miles west of Cheyenne, Wyoming. Disoriented by the storm, Woodward smashed into the side of a hill and was killed in the crash. Woodward had left Salt Lake City at 11:30 a.m. that morning and was scheduled to arrive in Cheyenne by 3 p.m. His airplane was last sighted over Laramie, Wyoming at 2:40 p.m. Woodward was found still strapped into the seat of his wrecked airplane. The pilot was only 26 years old at the time of his death.

In honor of this pilot, on December 21, 1920, Woodward Field was dedicated at 22nd West and North Temple in Salt Lake City. 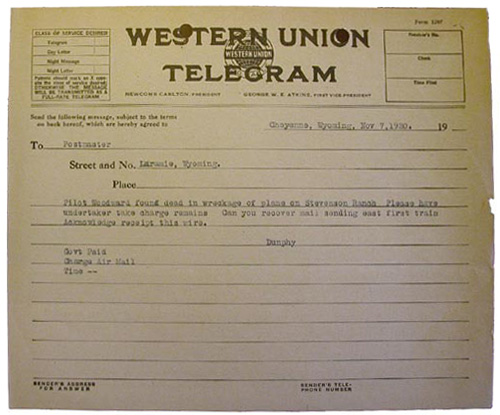 Woodward's death was relayed to officials in this telegram.
- Courtesy of the National Archives and Records Administration