Richard W. Wright was killed on April 10, 1920, a passenger in a Curtiss R4 mail airplane being flown by Mark C. Hogue to Washington, D.C. During the flight, the engine threw a rod and caught fire. Wright crawled out onto the airplanes' right wing to fight the fire with his hand extinguisher.

While trying to fight the fire, and when the airplane was at about 200 feet, Wright lost his hold and fell. The aircraft smashed into a tree, throwing Hogue clear of the burning wreckage. Hogue managed to make his way to Wright's side, finding him still alive, having sustained broken arm, thigh and hip bone. Unfortunately, Wright soon succumbed to his internal injuries. 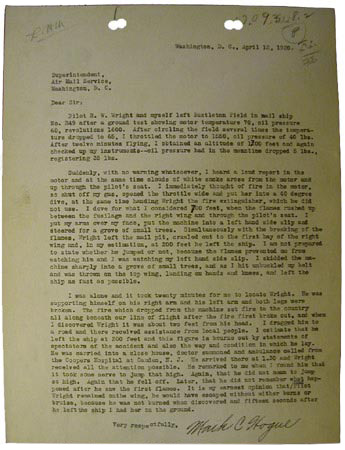 Hogue's report of the fire and crash that killed Wright.