Milton Barnes started a letter to his wife Rhoda in Cambridge, Ohio with this line on December 24, 1863. At the time, he was lieutenant colonel of the 97th Ohio Volunteer Infantry Regiment and was stationed in a camp on the Holston River about 25 miles from Knoxville, Tennessee. This letter is one of 200 between Milton and his wife Rhoda housed at George Mason University. Many of Milton’s letters include first-hand accounts of battles, difficulties in traveling, and remarks on events such as the surrender of Lee at Appomattox and the assassination of Abraham Lincoln. His wife's letters include political news and comments as well as family matters. Both Milton and Rhoda frequently write about the act of writing itself and concerns they had about how the mail was reaching them. 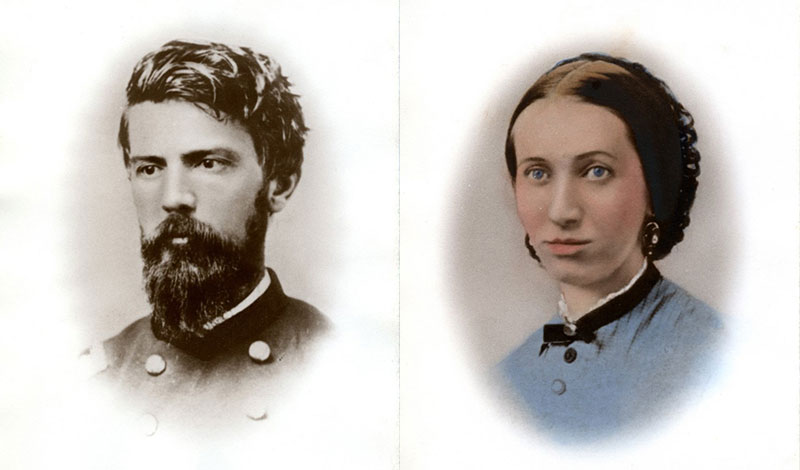 Letters between loved ones provided a crucial outlet to soldiers and those they left behind. Some of the hurdles soldiers overcame to write letters were finding a quiet spot to write, time, and procuring paper to write on. Even civilians were careful not to waste paper. Barnes’ wife Rhoda sometimes employed cross writing, turning the paper sideways and writing over the original text to add more text on the page, in her letters. There were also issues with the mail traveling between the South and North. Postal service was suspended to the Southern states where Confederate stamps were valueless and soldiers were constantly on the move, increasing the chances of letters arriving at the wrong destination. Still, due to the necessity for current information between families, mail was increasingly sent and often delivered successfully. 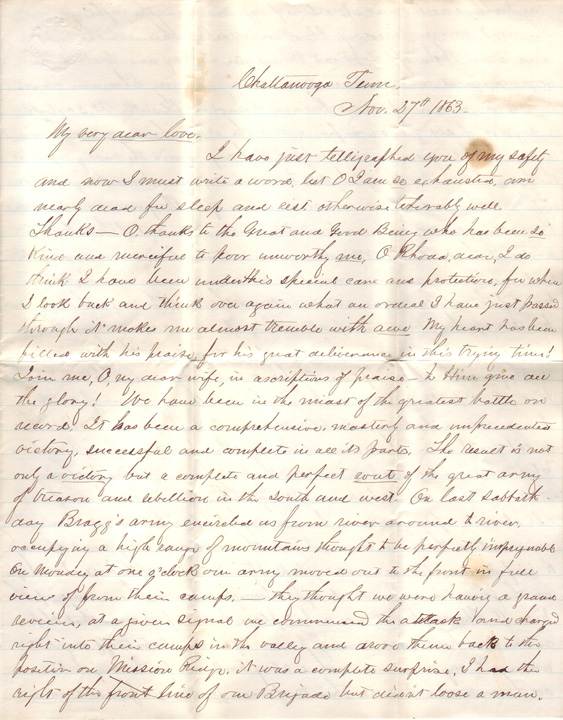 Milton Barnes begins his letter on Christmas Eve by describing the circumstances of his writing situation. He writes seated on the ground by “our rude camp fire, with the buzzing crowd of soldiers around”. He is also under strain with materials and time allowing him to write: “just now while I am trying to write with the Adjutant’s pen & a borrowed sheet of his paper he is hurrying me to write himself as the orderly goes with the mail in a few minutes, and forty things are to be said and done.”

Even with hardships Barnes writes eight pages front and back. It is a long letter for him and he describes his previous attempts at writing and his displeasure with the mail as, “a few random pencil marks to assure you of my welfare, and send it off in a hurry without any assurance that even they would ever reach you. Such is the looseness of the mail arrangement and every other arrangement in this department that we have all long since voted the army of the Ohio with headquarters at Knoxville one grand humbug”. Military mail was the main mode of transportation for the letters Rhoda and Milton exchanged, but even a military arrangement couldn’t guarantee the safe arrival of mail. Single “express” or “dispatch” riders were putting their life on the line to deliver the mail and carrier vehicles could also fall prey to being robbed by confederates.

"...without any assurance that even they would ever reach you. Such is the looseness of the mail arrangement..."

Milton expresses gratitude in receiving Rhoda’s letters. “One thing I have been very fortunate in, that is I have all your letters up to Dec. 18th – about a week ago. The first mail we received, I got three letters and O such good nice kind ones.”

As letter writing was one of the most important ways for families to stay in touch and share information, letters would be circulated around a family. Milton acknowledges Rhoda’s mother as one who may read his letters. “I have no objections what ever for Mother to read my letters. I only fear she will not have a very high opinion of my ability in that line, from the specimens I am compelled to send sometimes.”

Saving letters was also a concern for Milton. Toward the end of his letter he writes: “Did you ever get the scraps of letters I sent you from Chattanooga? If you want to preserve them I will get you a nice scrap book when I come.” Many of the letters in the Barnes collection still have the accompanying envelope and have been lovingly preserved since the Civil War. 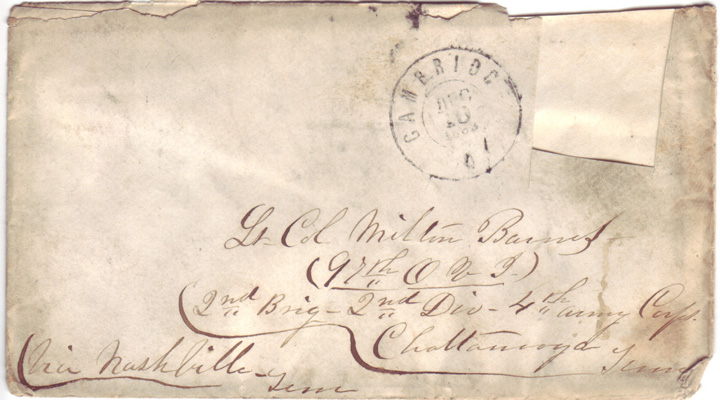 The Milton Barnes Papers (1853-1891) housed at George Mason University contains two hundred items, most of which is correspondence between Milton and Rhoda Barnes during the Civil War. The collection is currently undergoing digitization as part of the Association of Southeastern Research Libraries (ASERL) Cooperative Digitization Project: “Civil War and the American South: Primary Source Materials from the Region’s Leading Research Libraries.”