Earle Ovington: Pilot of the First Official Airmail Flight in the United States 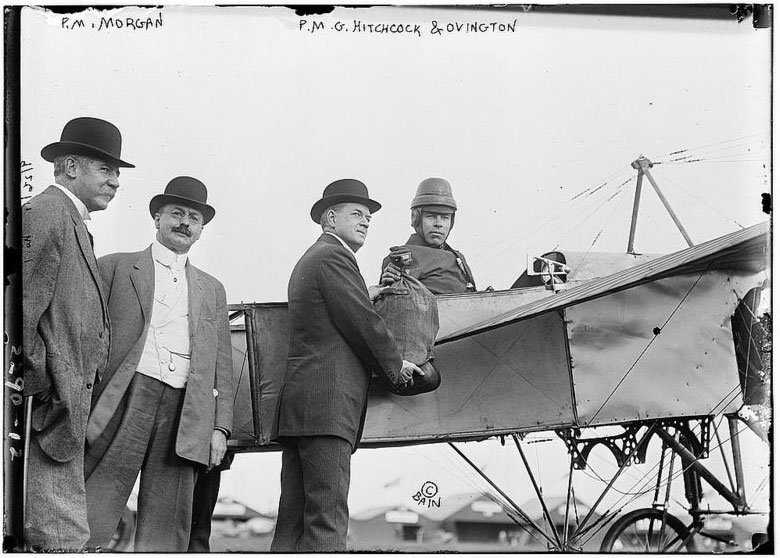 Earle Ovington receives a bag of mail at the International Aviation Tournament in Garden City, New York, where he took off for the first official airmail flight in the United States.

Earle Ovington was the Post Office Department’s “First Aeroplane Mail Carrier,” but he wasn’t the first person to get airborne with the mail. John Wise flew mail by balloon in 1859. Fred Wiseman “unofficially” carried mail in February 1911, coincidentally the same day as an airmail flight in India. In September 1911, Ovington was officially sworn in as an airmail carrier before climbing into his fixed-wing plane and flying from Garden City, New York to the nearby town of Mineola with a heavy sack of mail. As a person and a pilot, Ovington was a unique character and his September 23, 1911 flight has an interesting story.

Born in 1879, Ovington was an innovative and passionate figure of aviation that gave birth to the experimentation of mail delivery by air. Around age nine, he was given a $1 electric motor and a book titled Experimental Science. He loved the idea of innovation and how he can create new ideas and technologies just by using trial and error. His aunt said her electric door bells never worked when her nephew was around because he always stole the batteries for his experiments in the attic. At 16, Ovington left school and went to work as a messenger boy for Edison Electric Illuminating Company making three dollars a week. Here, he saw the “electrical revolution” firsthand. In 1900, Ovington attended Massachusetts Institute of Technology (MIT) to further his electrical knowledge.

After becoming interested in motorcycles and other vehicles, Ovington befriended Glenn H. Curtiss who introduced him to the young world of aviation. Ovington then attended Louis Bleriot’s Aviation School in France, sponsored by his successful MIT friends. While earning his wings, the aviator adopted a mascot described as a French gendarme by the name of “Treize” (the number thirteen in French). He deemed his lucky number to be 13 and flew with it painted on his wing. Apparently not superstitious, Ovington knew that taking this “unlucky number” as his own would make him unique in the aviation world. 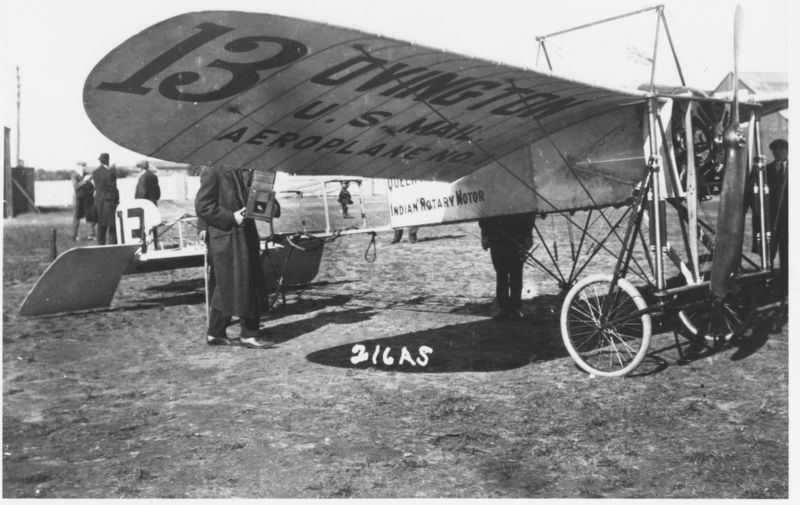 The Dragonfly's mono-wing design was a new and revolutionary way of building aircraft.

Although the idea of transporting the mail through the air had been thought of before, the Post Office Department made it an official form of mail delivery with Earle Ovington, although his flight was experimental. He flew his plane which he named Dragonfly and airmail was officially born in the United States on September 23, 1911 at Nassau Aerodome, Long Island. The Dragonfly was a mono-wing plane (Fred Wiseman’s was a bi-plane) built from the Bleriot XI model that was fitted with an inverse curve on the wing. Knowing that aviation was still a dangerous business, Ovington provided stability by affixing six steel straps beneath the wing (most had only four). This revolutionary design required more maintenance; but it would be able to fly higher. During the flight, Ovington travelled at an altitude of approximately 500 feet.

Postmaster General Frank H. Hitchcock spent his career trying to adopt airmail into the delivery system. In an effort to do so, Hitchcock wrote a letter to Lieutenant Governor Timothy L. Woodruff of New York. When Ovington heard about the flight and that the Lt. Gov. had not chosen a pilot he offered his experience and passion for no cost. In turn, Woodruff chose Ovington to fly the first U.S. Airmail flight. As an avid philatelist, Ovington knew that this flight was going to be important for the delivery of mail and the U.S. Post Office Department as a whole. Without Hitchcock’s vision for the promise of aeroplanes, the air mail service and the career of Earle Ovington would have been suspended. 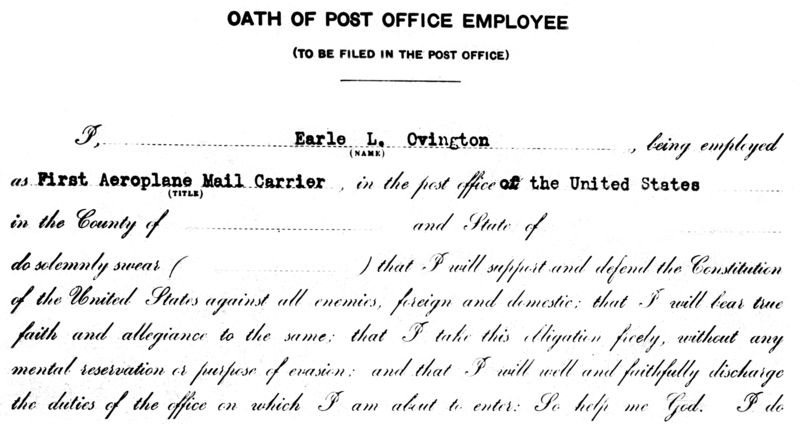 Above: a portion of the oath Ovington swore. Courtesy National Air and Space Museum Archives.

The flight took place at the International Aviation Tournament in Garden City, New York. The stage was set, Hitchcock swore in the newest member of the Post Office Department, as the “First Aeroplane Mail Carrier.” The spectators at the air meet did not know that they were about to witness history. Hitchcock set up a tent on the grounds to allow the spectators to become a part of history. They were able to write a post card to anywhere in the country and send it off on the first official airmail flight. The first and most important flight showcased the rest of the event as numerous mail trips were taken over seven days as the total number of letters totaled 43,247. 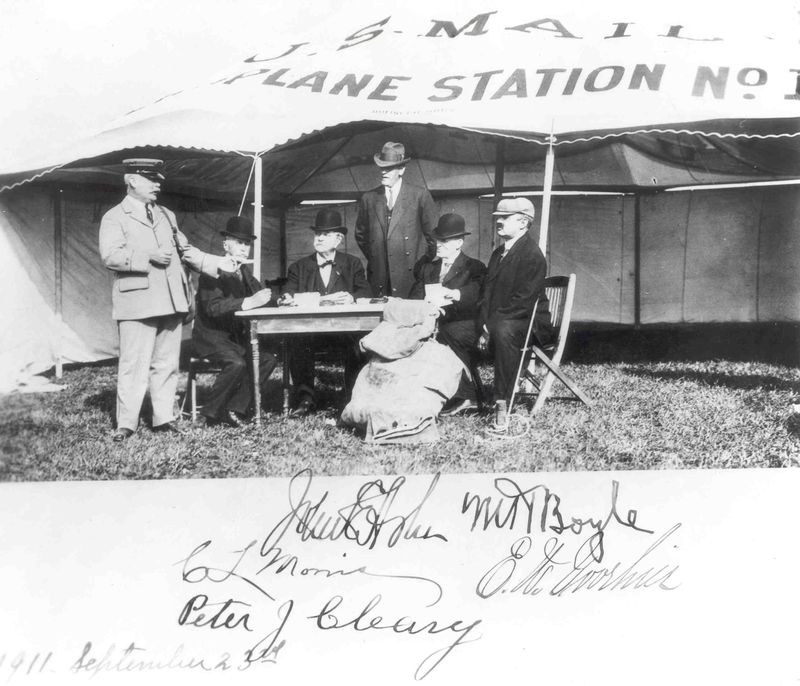 Attendees could write postcards and be a part of the historical flight at this tent set up by Postmaster General Frank H. Hitchcock.

One hundred years later, the Postal Museum is sharing the story of Ovington’s flight with a family day on Saturday, September 24, 2011 from 11 a.m. to 3 p.m. The first official airmail flight showed people that the Post Office Department was committed to speed and innovation in transportation. The aviator dedicated his life to the birth and life of airmail in the Post Office Department. Earle Lewis Ovington passed away in 1936 at the age of 56 from cancer; the first airmail flight on September 23, 2011 still goes down in history as one of the most important days in United States postal history. 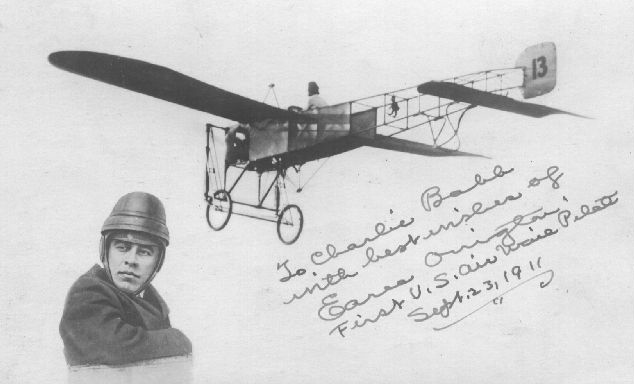