The Big Reveal: Owney the Dog Emerges from his “Makeover”

For a dog of his age (at least 124 years), Owney doesn’t look so bad. But when you’re the subject of two new exhibitions, a US postage stamp, nation-wide celebrations, a look-alike contest, and a four-day family festival, you want to look your best. This week, Owney emerged from his conservation treatment, or “makeover” as we like to call it, and here’s how the Railway Mail Service mascot looks since leaving exhibit in May 2011. 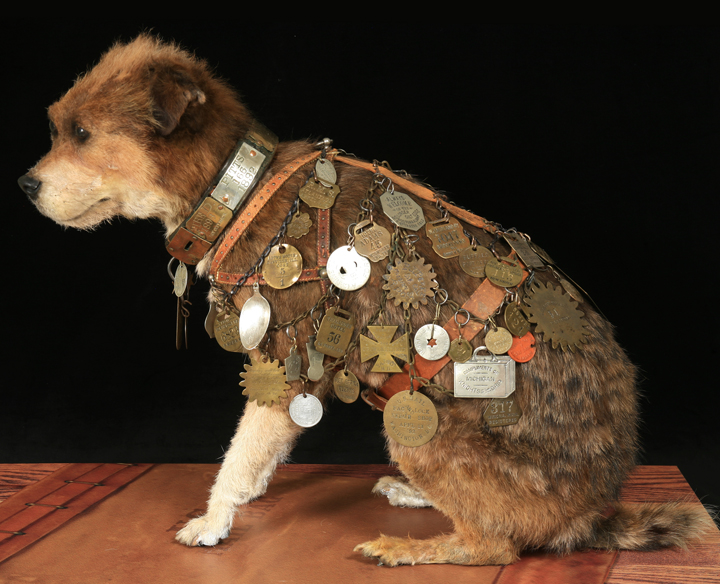 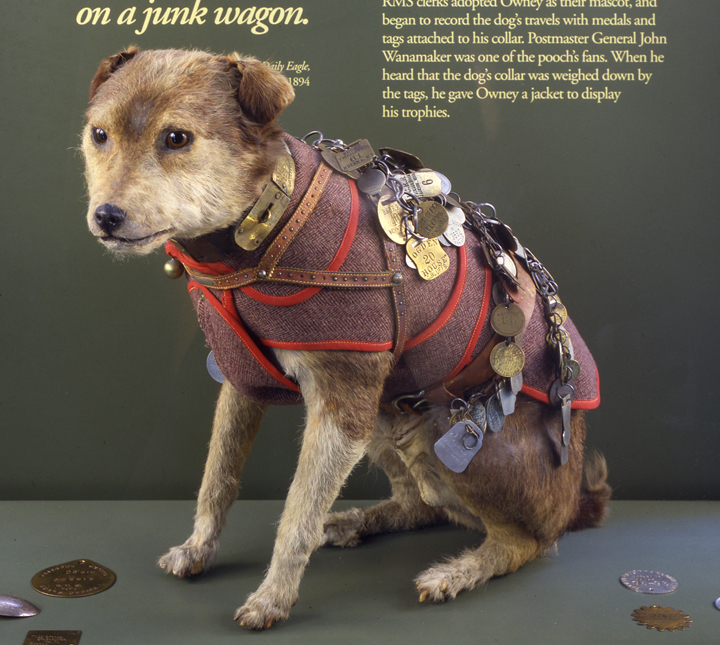 Owney before his makeover.

You’ll spot some major differences in Owney’s appearance in the “after” photo. Below are the major steps of Owney’s head-to-tail makeover, which was completed by Paul Rhymer, a sculptor and former taxidermist of the National Museum of Natural History.

On the left, Owney gets rinsed. On the right, his fur immediately fluffs up.

One of the most dramatic differences in the rejuvenated Owney is the fluffiness of his fur. Originally taxidermied in 1897, Owney had been carrying around a lot of dust. Past attempts to touch him up and improve his appearance had left wax, paint, and fur patches. One of the first steps Rhymer took once Owney arrived at his studio was to give Owney a bath.Washing started with a solvent to remove the paint used many years ago to restore his faded hair, and then with water and shampoo to make his hair nice and fluffy. Traces of arsenic that had been used as a preservative were also removed. Additional paint removal was done with a toothbrush. The cleaner, non-toxic Owney was dried and his fur quickly fluffed up.

His face has more personality 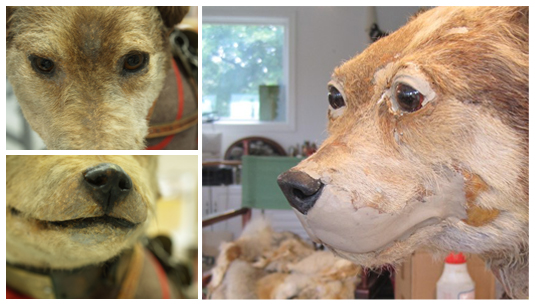 On the left, Owney's pre-makeover face. On the right, Owney mid-facelift.

Historic photographs reveal that Owney had a fairly prominent, boxy snout and an expressive forehead. Rhymer worked to bring back some of that structure and expression by giving Owney a “facelift.” While his hair was washed the skin was softened enough to help correct the shape of his face. Newer, more accurate eyes were installed. A more accurate cast dog nose was used to replace his, giving it a softer, more natural look compared to the old shriveled up one. Finally some of the missing hair was replaced to return his soft look.

His jacket is gone

On the left, this historic photo of Owney shows him wearing a leather harness but no jacket. On the right, Owney’s fur, now fit for exhibition, is again visible with the removal of his jacket.

When Owney’s collar became weighed down by metal tokens and tags, Postmaster General John Wanamaker gave him a leather harness to display them and distribute their weight. The harness was the extent of Wanamaker’s gift to Owney, but somewhere along the way he also acquired a jacket. The jacket he wore was probably a gift of the Smithsonian Institution in the 1950s or 1960s, perhaps designed to mask fur loss on his back. Patching and dying have corrected many of these problem areas. While many visitors were accustomed to Owney’s fashionable jacket, the team behind the Owney project decided to remove it to be more true to his original appearance. Don’t worry, the jacket, itself a piece of history, will remain in the museum’s permanent collection as we continue to learn more about Owney’s story both in his traveling days and at the Smithsonian.

On the left, Owney's fur looks fine without a jacket. On the right, a newly polished tag.

Owney’s tags and tokens also got a polish. Preservation Technician Rebecca Johnson and Conservator Cathy Valentor cleaned each one using a variety of methods based on the tags’ cleaning needs and its material, some examples are mineral spirits and calcium carbonate, but all tags were polished using a micro-crystalline wax. The process took about five months.

Owney’s tags will not only have more polish, they’ll also be more visible. Owney will wear about 90 tags, less than the 123 he wore for many years on exhibit, making them more readable. Owney’s social media fans recently voted on which tag should receive a prime location on his harness. The spoon-shaped tag won and was added to Owney’s harness.

In addition to being featured in the new exhibit, all of Owney's tags (377 in total) are now available online!

It’s all in the details

Taking a closer look, you may spot some smaller details that are different. Owney’s tail, for example, is much fuller and fluffier, thanks to some fur patches and a good rinse. His paws are arranged more naturally (and by the way, most of those nails are the real thing).

Owney’s makeover adds extra fun to the celebration of his stamp issue and new exhibits this year, but it also means Owney will remain in great condition for years to come. 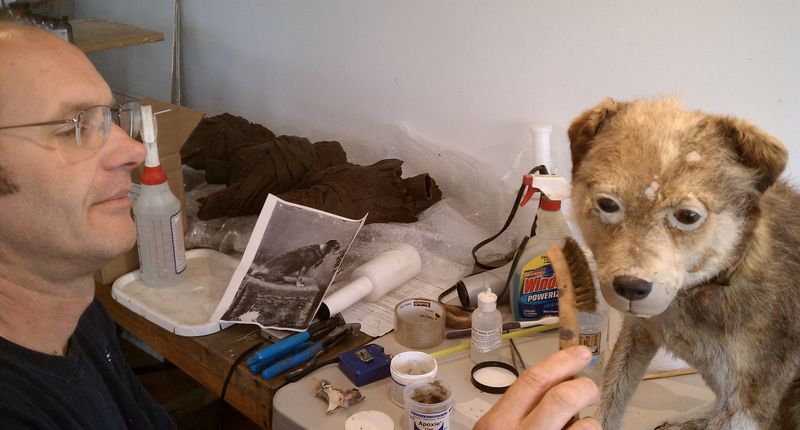 Taxidermist Paul Rhymer works on improving Owney’s appearance. On his work surface, you can see a historic photograph of Owney as reference.

Now that Owney is looking his best, join us to celebrate his new postage stamp, exhibitions, and four-day festival! Stay tuned for updates on Owney's teacher resources and other news. You can follow Owney on Facebook and Twitter for news and fun facts.