The Catherine Manning Papers and Documents consist of twelve file boxes of material including manuscripts, exhibit pages, photographs of stamp sources, and correspondence. Catherine “Kate” Manning was a thirty-year curator of the National Philatelic Collection at the Smithsonian Institution. Her papers preserve the history of the Smithsonian’s National Philatelic Collection for several decades as well as the philatelic history in the United States and for women stamp collectors.

Newspaper clippings contained material that is readily available today in several sources, that was not so at the time Manning assembled this material. It was clear from the selection of clippings that she was not only interested in stamp designs but corresponded with authors and philatelic scholars about this topic, including F.L. Ellis and George B. Sloane who wrote for Stamps. Her personal collecting interests had a great range including mint and used stamps – U.S. and world, saved correspondence envelopes and postcards, greeting cards, poster labels (also known as cinderellas), stamp exhibition souvenirs, special event covers for anniversaries and local events during her lifetime, first day covers, women on stamps, and especially the sources that inspired stamp designs. Some of her personal collection has been accessioned into the Smithsonian National Postal Museum’s permanent collection as part of the National Philatelic Collection. In addition, literature from Manning’s estate was donated to the Smithsonian National Postal Museum Library.

Several objects from this collection have been exhibited in NPM exhibitions including Delivering Hope: FDR and the Great Depression, Collecting History, and the William H. Gross Stamp Gallery.

Catherine Lemmon Manning (1881-1957), the first woman outside the sciences to achieve the title “Assistant Curator” at the Smithsonian, tended the National Philatelic Collection for nearly thirty years. During her tenure, she organized the collection, processed thousands of specimens received from the Universal Postal Union and the Bureau of Engraving and Printing, published articles, exhibited, and participated widely in the philatelic community. Throughout her life she received many honors, including being the first woman elected to office in the American Philatelic Society (vice president, 1935-1937). She was a charter member of the American Philatelic Congress and in 1936 received its award for service to philately. In 1938, Manning served on the committee that selected Elaine Rawlinson’s design for the 1938 Presidential definitive series. According to her daughter-in-law Ruby Lee Robertson, Manning met numerous times at the White House with President Franklin D. Roosevelt, a fellow philatelist. She was a charter member of the board of directors of the privately-run National Philatelic Museum in Philadelphia and received its 1949 silver trophy for achievement in philately. The American Philatelic Society inducted her into its Hall of Fame in 1990. 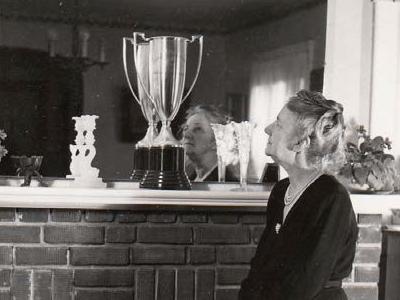 Women in the Postal Service and Philately
Inventory ›
Back to Top