The Lure of Lithography

Unlike other printing methods, offset lithography (also called “lithography,” “litho,” or “offset”) does not involve cutting or etching a design into a plate. Instead, the image is imprinted on a smooth surface with a chemical. A second, water-base solution is wiped over the surface, filling in around the design. Ink applied to the surface is repelled by the water, sticking only to the design. A rubber blanket, fastened around a cylinder, then transfers the ink to paper.

Lithography produces softer images than engraving and is less secure, but it is cheaper and more efficient, with fast set-ups and less maintenance. Rubber surfaces are also more forgiving of paper variations. For these reasons, the United States used lithography for a few stamps at the end of World War I.

Modern stamp lithography is much sharper. It also uses process color, with separate plates for each color layer; each layer is made up of very fine dots. The first U.S. stamps printed entirely with full-color lithography appeared in the early 1990s. To ward off counterfeiters, lithographed stamps incorporate a variety of security features, such as those in the 1997 Air Force stamp. 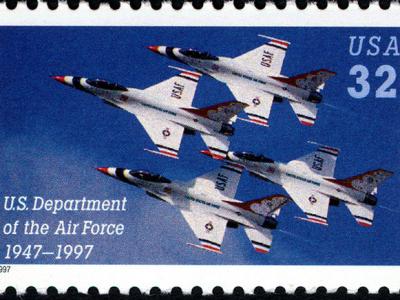