The obvious peril caused by wrecks and fires was added to by the fear and very real chance of train robberies. Mail cars carried registered mail, which meant they often transported large amounts of money and valuables from one end of the line to the other. The Railway Mail Service was so highly regarded and trusted that in the late 19th century, they were trusted with a few massive shipments of gold from California to Washington, D.C. or New York City. While Railway Post Office clerks were armed with .38 caliber revolvers, the allure of riches was strong enough for some to attempt robbery of the mail car. While many mail clerks never experienced a traumatic robbery, the chance was still imminent and frightening.

In 1892, the Rio Grande mail robbers were sent before a U.S. Circuit Court. They were accused of robbing the United States Mail of $3,000. These men were well known as the biggest crooks in the West. There were suspicions of other unlawful activities on the part of the same robbers. Additionally, the story was sensationalized throughout the trial, as everyone involved in the situation had stories they wished to tell. All of the evidence that could possibly be used against these men was brought up, creating romanticized, over-the-top stories that further dramatized this incident. The robbers walked into the court room in their “rough costumes, slouch hats and high-heel boots….[they had a] pronounced swagger, [and an] air of indifference.(1) Descriptions like this only made the story more appealing to the public. 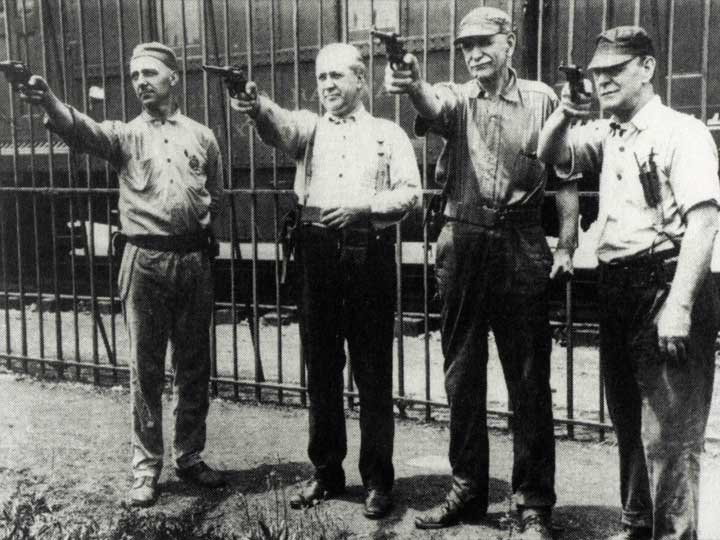 Railway Post Office clerks were armed with .38 caliber pistols to protect the mail.

An armed robbery occurred in Colorado around that same time and place. The criminals stole $3,600 from passengers on the Rio Grande train No. 4. The gang of robbers had at least seven rifles with which they used to force the engineer to stop the train. The mail car was broken into but the Express Manager used his weapon effectively, stopping theft from the RPO car. Horses were spotted near the scene, ready for an escape.(2) This type of robbery was common, with obvious forethought and immense planning on the part of the criminals.

Armed robberies were not exclusive to the West, however. In 1891, a train car about ten miles from Birmingham, Alabama, was victim to an incident. One of the robbers held up the engineer in order to make him stop the train. One of his accomplices was responsible for taking care of the clerk in the Railway Post Office Car. He was met with some resistance by R.P. Hughes, the mail agent. Hughes backed down when he sustained a bullet through his clothing. While there were two bags of registered packages, one bound for New York, the other for Atlanta, the criminals only took the former. The packages were found 300 yards away, the contents taken from 85 of them. One that contained no money was discarded. A $1,000 reward was placed for the robbers as was typical of the time period.(3)

Want to hear more about robberies? Here are some stories from former RPO clerks:

James Hoffman:
Oh, in my course of time on the Fort Worth and Galveston, I think we hit five or six cars that were trying to cross, you know, in front of the train. We hit five or six cars. And once when I was subbing on the Newton and Forth Worth, Newton, Kansas to Fort Worth, we were coming out of Oklahoma City and we had several bags, several pouches of mail for the federal depository in Dallas, and they told us this was an, old bills that were going to Dallas to be destroyed. And we had 8 or 10 bags of them. Just before the train left Oklahoma City, a guy in a suit got on the train, identified himself to the clerk in charge, and when he got off the clerk in charge told me, he says, we’re expecting a robbery at Pauls Valley, they’re expecting a robbery at Pauls Valley, Oklahoma tonight, with those eight registered bags we got back there. Keep your gun handy. We pulled into Pauls Valley, and I started to walk back towards the door, and the clerk in charge comes with me, he says just open the door a crack and see how many people are out there. Now this is like three o’clock in the morning. And I opened the door a crack and I said well there’s a baggage cart out there with one man on it. Transfer the Pauls Valley mail as fast as you can. And then shut and lock the door. So we did. Shut and locked the door, came into Fort Worth, we still had them eight bags of bills that were going to be destroyed [laughs]. Where they got their information, they didn’t tell us. They just said they’re expecting a robbery at Pauls Valley. But it didn’t happen [laughs].

Ed Levy:
We handled registered mail, and when we put the mail out, not my train, the ones who worked the opposite week, they put the mail out at New Haven, Connecticut, and somebody slashed, grabbed the pouch, slashed it because you know, it had a special lock on it, registry lock, and took out whatever was in there. What they were looking for was money that we used to bring down to Federal Reserve, like from the banks in New England, from New Hampshire and Vermont. We used to bring it down to Springfield, put the mail off there, and it used to go over to Boston to the Federal Revere. And so somebody robbed it, and everybody, they were given, the FBI was giving everybody a lie detector up at the New Haven office. They never found them as far as I know.

Seemingly “professional” criminals were not the only culprits in this type of action. John R. Griffith, of Fresno, California, was a crew member on the whaling ship, the Northern Light. He wrote a letter admitting to a $7,000 robbery and mail rifling, as well as the murder of some passengers and an engineer during that robbery. He claimed to be in cohorts with two accomplices. Griffith accused one of these accomplices of setting the shipper where he worked on fire the previous month. He said John P. West set the ship ablaze in order to make an escape from the crime he committed on the train. Even though Griffith admitted to his crime, he was not immediately caught because his ship left for a cruise of the North Pacific before he was apprehended.(4)

Sadly, there were some instances of postal employees stealing the contents of the mail. One messenger between a local post office in Middletown, Ohio and its railroad station was convicted of stealing a mail bag containing $4,000.(5) Other instances include a clerk who was convicted of stealing a letter with the equivalent value of $4.50. That clerk was arrested by post office inspectors upon exiting the train. He had worked in the postal service for 14 years.(6)

Perhaps the most famous instance of mail car robbery was perpetrated in 1923 by the DeAutremont brothers, Hugh, Ray, and Roy. The RPO car they were trying to rob was destroyed when they used too much dynamite in their effort to enter the car. [Learn more about what happened to the DeAutremont Brothers and see the detonator they used in the explosion.]

One of the reasons these mail cars were so attractive to robbers was that they often carried millions of dollars of gold across the country. A specially chosen group of clerks, escorted by Treasury Agents, carried $20,000,000 in gold from California to Washington, D.C. in 1892. This gold was all being moved to the treasury department from the sub-treasury because the War Department was concerned about its wellbeing so close to the sea coast. Another $100,000,000 in gold was also transported from the sub-treasury by Railway Mail later in 1892. While the transportation might have been necessary, it also caused major security concerns for the clerks aboard the trains. Great measures of secrecy were taken when loading and transporting the gold. Only a few people had knowledge of the exact route the train took from California to the East.(7) And in at least one instance, armed marines were added to help guard the train cars.

Clerks who helped prevent robberies, were sometimes rewarded by insurance companies. Earl Boothman and Guy O’Hearn were awarded $1,000 each after they stopped a robbery in 1939.(8)

Just as in the trial of Rio Grande Robbers, where the story was embellished and sensationalized, many dangerous run-ins ended up being romanticized in popular culture. The first motion picture, “Great Train Robbery”, included a mail car robbery. Other movies followed, including “The Great Mail Robbery”, which was the fictional story of the search and chase for a mail robber. The romance of the rails, combined with the allure of riches, led to intriguing stories for mainstream audiences.

‹ Fires up Weather ›
Back to Top